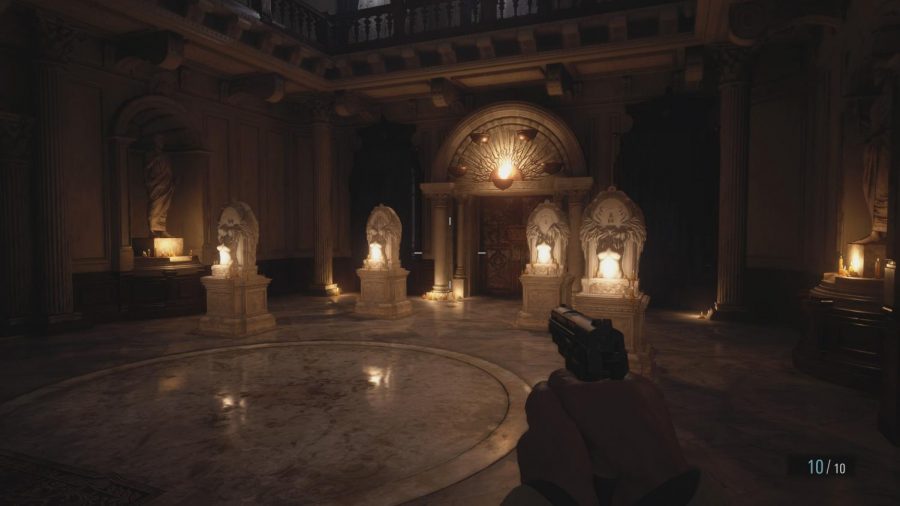 Players are able to explore parts of the castle that were previously unavailable in the MAIDEN demo. Pictured above is a puzzle that is actually unsolvable in the demo, but is sure to be a challenge in the full release. Photo credit: Capcom Unity/Capcom, Co., Ltd.

Resident Evil Village’s second timed demo was made available for a limited time on April 23 and allowed players to explore the castle section of the game.

Players are, once again, limited to a 30-minute slice of the main game.

It’s not an ideal way to experience the demo, as you always feel rushed through the experience and can never really enjoy it, but it’s currently the only way for the public to experience Resident Evil Village.

In contrast to the “village” demo that preceded it, it seems as though developer Capcom wanted to allow players to experience and experiment with the currency and trading system that they implemented in the title.

As the demo begins, we find ourselves in Castle Dimitrescu, the setting from the original MAIDEN demo released in late January earlier this year.

In contrast to that demo, however, we’re given the ability to defend ourselves against the castle’s denizens.

The biggest, and perhaps most interesting part of the demo, was the ability to check out the new merchant’s shop and see how extensive and customizable our arsenal will be in the title.

Taking cues from “Resident Evil 4,” arguably the most important title in the series, the presence of an in-game merchant opens countless opportunities for players to customize their weaponry by adding extended magazines, reducing reload times and increasing firepower, among other things.

The demo allowed players to tinker a bit but doesn’t fully allow full exploration of the options that will be available in the retail release of the title.

The environment in the castle is like that of the MAIDEN demo (they are, of course, the same area), but there is a multitude of differences in the environment that set them apart.

Players can expect to find some doors shuffled around, with some being locked and inaccessible while doors that were previously locked in the MAIDEN demo now being unlocked.

It was impossible not to be reminded of the Spencer Mansion from the original Resident Evil while exploring the castle. From the short amount of time that Capcom has allowed players to spend with their new title, it’s obvious that much of its DNA has come from the survival horror roots that the series has grown from.

One of the fears with the previous title, “Resident Evil: Biohazard,” was that the shift to a first-person perspective would be a decision that would be to the series’ detriment, and it proved to only be a boon.

“Resident Evil Village” continues to build on that perspective while upping the action to a noticeable extent. This, however, does not come at the cost of the horror, which remains very much alive and well (at least in the 30 minutes available for play).

This new demo sets a positive precedent for the future of Resident Evil. Players will have the opportunity to experience the demo on any platform starting May 1 and will be available until May 9.