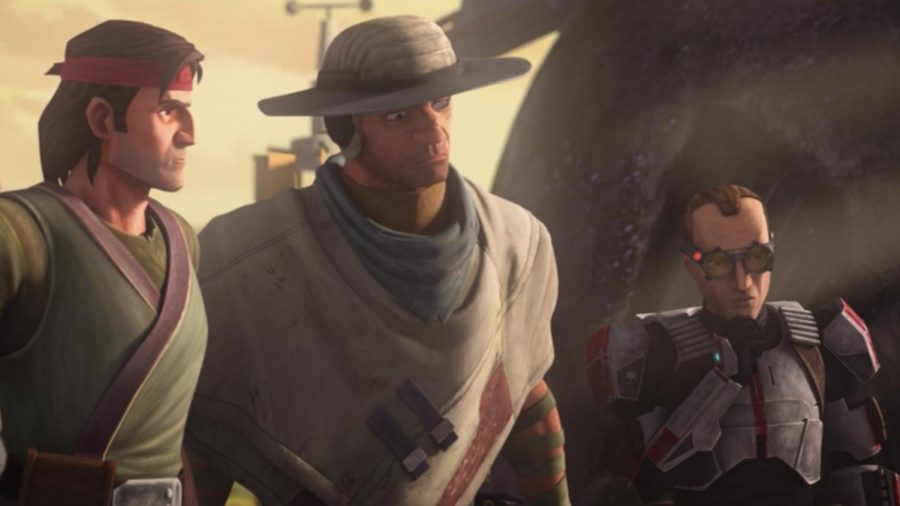 The second episode of The Bad Batch has arrived and it brings out a nice pair of both character development and action.

The episode was about 30 minutes long in contrast to the 71-minute long premiere on May 4.

After escaping Kamino, The Bad Batch and their newest member, Omega, head to Saleucami to meet up with an old friend and Clone deserter Cut Lawquane, who tells them about the inhibitor chips that all clones have on them when being born.

Audiences last saw Cut in season 2 of The Clone Wars.

The squad thought it be a good place to hide out but it turns out that Cut and his family are leaving Salecami due to a strong military presence on the planet.

They later found out that they need chain codes in order to get onto public transports, leading Tech and Echo to plan a way to steal some codes for the family.

This results in a firefight with the Bad Batch trying to escape the planet. Not too long after, they successfully obtain the codes and safely leave the planet.

Hunter tries to leave Omega with Cut since he believes he deserves a family, but she tells him that she’s staying with the squad knowing that she’s just like them.

The plot was charming as we got to see a bit more of Hunter’s emotional side, thinking about what’s best for the kids and worrying if tagging along with them is safe for a child.

It gave off similar vibes with Mando and Grogu from The Mandalorian, a show that Dave Filoni also worked on, and it worked in this show as well.

It was also incredible to see Cut again after so long as it was a great aspect to see and a shame that they didn’t touch more upon this concept in Clone Wars.

The dialogue was great as each character had a good number of lines that stood out and a good dynamic with Tech and Echo as there are more scenes of them interacting and planning together.

The animation and visuals are still impressive as environments look detailed, with dirt looking clearer and blaster effects really shining in great detail.

It was also a good idea to have a 30 minute episode instead of an hour.

Even though it was great to have the first episode being long to entice fans, it did feel that it went a bit too long.

Decreasing the runtime made it work, with the episode functioning like an actual animated show.

Overall “Cut and Run” is a great second episode, that brings back a familiar face and shows more sides of the characters’ thoughts and feelings.

The episode gets a four out of five, a great second episode, and hoping that fans get to see more familiar faces down the line as the series progresses to new planets and new threats.