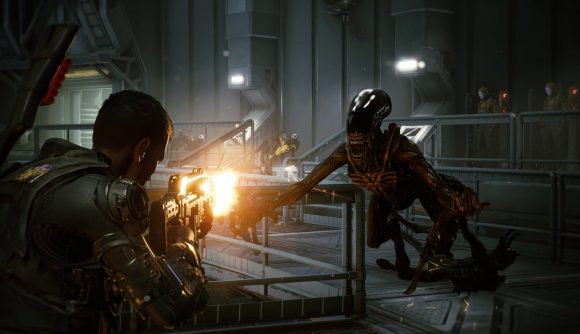 Alien Firestorm is available for players starting Aug. 23, 2021. It is an action-packed game for sci-fi enthusiasts and followers of the franchise. Photo credit: PC Gamer

Aliens: Fireteam Elite comes off as contradicting, because while it is the first major Aliens videogame in a decade since Alien: Isolation, it is not the first of its kind.

After its Aug. 23 release, players are presented with a frontier world and space station beset by a Xenomorph—the term typically used for the parasitic insectoids—infestation. It is using this setting and enemy that Fireteam establishes itself as a “Horde” shooter type.

To elaborate, a Horde shooter is a game in which the player is attacked by a seemingly endless supply of enemies as they press forward to complete the objective. In order to repel these assailants, players are given a variety of positions as Colonial Marines ranging from gunner to medic.

It isn’t the game that will reinvigorate interest in the franchise, yet it is the only one besides its predecessor to accurately play on the themes of the original Alien movies.

Specifically, it invokes that feeling of being overwhelmed as dozens, if not hundreds, of bloodthirsty aliens blanket the floor, cling to the walls, and crawl inside the vents looking for potential victims for the Queen’s eggs to impregnate in frenetic sections of action.

Old-time fans will recognize the similarity between Aliens (1986) and Fireteam in that it feels like an interactive Blockbuster, albeit with a plot that is less involved.

Instead, it is more concerned with the universe behind it and emphasizes the fact that for the Xenomorph threat, evolution is a tool rather than a biological process working in the background by presenting high-level threats like the Praetorian and Crusher.

Not to mention, the enemy AI attacks without a thought for self-preservation that forces players to prioritize specific targets or else risk being splashed by acidic blood.

The issue, however, regarding these impending threats is that some possess an absurd amount of health, which lore-wise, indicates that the Xenomorphs have evolved to better deal with the weapons used by humanity.

Such a concept is interesting at first, but from a gameplay perspective, having to whittle down the health of multiple enemies can prove a tiresome challenge after the player has decided to invest more time into Fireteam.

That isn’t to say that this type of action is what some players are looking for; as a matter of fact, the game has been well-received with moderate critiques of 7 out of 10’s across all platforms (i.e, Xbox, Playstation, and PC).

The problem with Fireteam is that it doesn’t stand out against a multitude of similar games like Left 4 Dead or Payday 2.

For a player looking for some fun, Fireteam will provide it in force with a set of four campaigns brimming with thousands of Xemomorphs to purge from the edge of the known universe.

What it has failed to accomplish is leave an impression on the player and make the sensation of slaying the galaxy’s most dangerous predator different from beheading a mindless zombie.