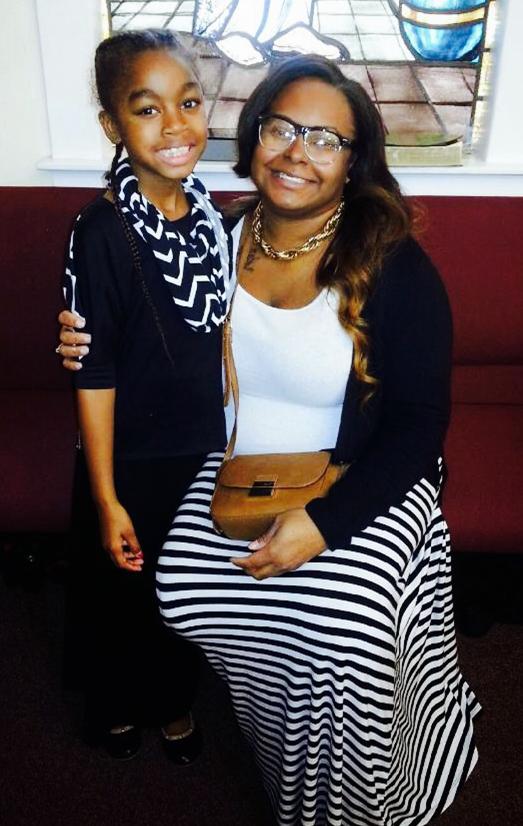 Calhoun poses for a picture, with her little sister, that she takes of as if she were her own daughter. Calhoun is a full time student, as well as a full time security guard.

“But, you have women like Jeneisha [Calhoun] […] and I feel they are the real life superheroes, ” said Calhoun’s boyfriend, Jarren Ross, with pride.

Although she’s faced many roadblocks and setbacks, she has continued to push forward towards her degree in administrative of justice.

Calhoun admitted that she has no kids of her own, but currently takes care of her little sister, who is under the primary care of her grandmother.

Ross, who has been with her for over three years, expressed that she has handled taking care of her sister as if she were a single mother.

“She doesn’t complain about it or try to push any of the responsibility on anyone else.

“She takes it all head on, working 8-9 hours, school, and still making sure her sister is taken care of.”

Being a mother figure, working full time, and being a full time student can seem like a lot to some students, but when it comes towards Calhoun, she gets it all done.

Ross acknowledged that things do take a toll on her, but she refuses to let anyone know because she prides herself on knowing she can do any task no matter the size.

For a little over five years she has been working to graduate, and transfer into a four year university.

She recalls that when she originally began school after high school, that she didn’t really know much about college.

With a lack of knowledge, she bounced from school to school searching for something better.

“I guess at that time I felt like it was going to get easier, but of course I was wrong about that […] I hoped from school to school until I took a break in 2010. I returned to Cerritos in fall 2014.”

Calhoun expressed that some of her setbacks have been with school.

“I failed my psychology class because I signed up for a half semester online class and unfortunately I had a lot going on then.”

Ross attributed her ability to overcome things by the fact that she has a strong mental toughness and her faith.

He admitted that her faith and persistence are his two favorite things about her.

“There are so many things I admire […] I say faith because just knowing some of the obstacles she has over come with her family beyond amazes me that she wasn’t detoured or brought into some of those negative problems.

“She relies heavily on that faith to get her though anything. Her persistence goes without speaking when she’s set to do anything, she does it.”

Calhoun plans on transferring to Cal State LA or University of Nevada, Las Vegas to finish her degree.