Students want a part of the Shakespeare steampunk makeover 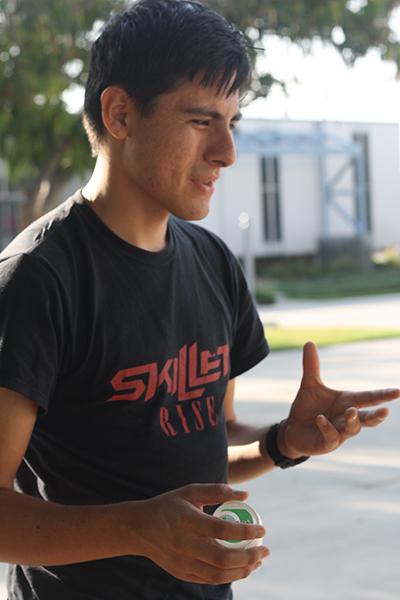 With acting experience under his belt and his familiarity with the roles, Cabrera expresses his confidence. Photo credit: Gustavo Lopez

Auditions for ‘The Tempest’ directed by Professor F. Reed Brown, got students to channel their inner actor during the first week of school.

The classic show will be taking a new look as Brown has decided to take a different approach with the directional concept and has set the show in a steampunk era.

Auditions and callbacks for the Shakespeare play were held on the first week of school and the cast list has since been posted.

The auditions process starts off with open sign up for students. After which, students are brought in one by one where they perform their prepared audition piece for the director and stage manager.

Stage Manager Ericka Danielle Bailey feels it’s important to help set up an intimate environment where students don’t have to worry about being judged.

Bailey, a theater tech major, has had pervious experience in working on previous Cerritos College theater productions such as ‘All the Timing’ and ‘Waiting for Lefty’. As stage manager, it’s her job to keep control of the play.

“I’m kind of the person who keeps everything together. I am the glue. Imagine a manager of the store, you need to make sure you keep everyone together yell at them when they’re late,”

She also looks forward to the direction that the play is being taken with its steampunk theme.

“I’m really familiar with ‘The Tempest’. I think it will go pretty well. The whole theme is why I wanted to do the show because i thought it was cool. If we can get it right, it’ll look pretty fucking awesome,” Bailey said.

The auditioned had students of all shapes and sizes. Some students with experience with the audition process, but for other students, it was their first audition.

Although Angel Cabrera, theater arts major, has had previous theater experience through drama classes and his church, this was his first audition.

“I basically have gone through ‘The Tempest’ and it’s different types of scenes, and the various portrayals of the characters,” Cabrera said.

He added, “I think it (the show) is very interesting. I think it’ll bring it back to life. Steampunk is a very radical way to bringing this to the school.”

Cabrera has been casted for the role of Caliban.

The auditions are not only for theater majors or those who are looking to pursue a career in that particular field.

Students of all kinds of majors auditioned simply for the experience or just for fun, such as Art Hanney, undecided major.

Hanney has had previous experience throughout his life as an actor and has worked with Lou Diamond Philips and even on the television show ‘Happy Days’.

“I got to work on ‘Happy Days’ back in the day. They paid me $250 a week just to sit around and eat burgers!” Hanney exclaimed.

For more information on the show please visit www.cerritos.edu/theater