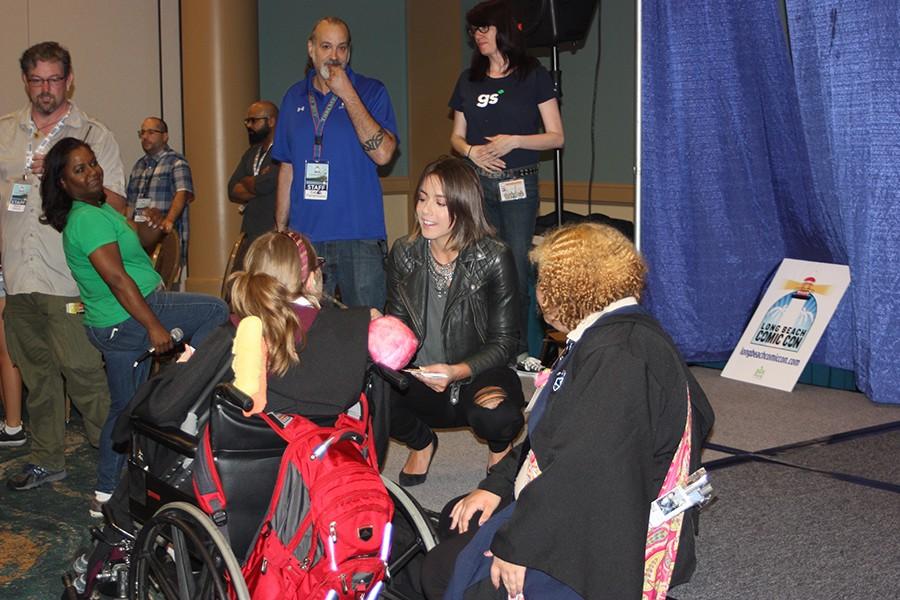 “Doctor Who” John Barrowman and “Marvel’s Agent of SHIELD” Chloe Bennet talked about their inspiration and behind-the-scenes outtakes as they highlighted the 2015 Long Beach Comic Convention.

Semi-famous actors, cosplayers, artists and writers gathered to celebrate and geek out on a plethora of comic-book and pop culture aesthetics.

Some of them included: contests, entertainment, panels, workshops, author signings, photo-ops and meet and greet sessions.

LBCC15 radiated with cosplayers filling the main entrance floor and hung-out with other cosplayers, encouraging other attendees to take pictures as they showed off their con-attire.

Samantha Broadwater cosplayed as a Princess Peach and Slave Leia mash-up and explained her admiration of the comic book vibes and social meet-ups with other cosplayers.

“This is my first Long Beach Comic-Con, it’s really awesome. You get to meet people that have similar interests with you. I do like to get pictures taken and be admired, it’s really fun to have a blast with people who are into the same nerdy stuff as you are,” said Broadwater.

On day one of LBCC15, a ribbon cutting kicked off the action-filled weekend; the main floor was divided into sections for easy navigation: Cosplay Corner, Artist Alley, Animation Island, Celeb Guest Area, and Exhibitors Hall.

Each featuring free makeshift sketches that comic book artist would draw for spectators, spin-the-wheel games that guaranteed a free prize with every spin, to a laser tag battle and interactive vendor booths where attendees could play newly anticipated indie video games.

In a cameo made by Bennet presented the Girl Scouts of Greater LA with the Comic Artist Badge, a badge needed to eventually establish a Girl Scout Silver award. Along with attending the award ceremony, Bennet spoke a few words about the impact of morals that the Girl Scouts can improve on and motivational words for the juniors and cadettes being awarded.

Director of Marketing and Communications of Girl Scouts of Greater Los Angeles Kenya Yarbrough explained the organizations involvement with comic con and the impact of having Bennet present the badges.

“Her sentiment at the end to really challenging the girls and inspiring the girls to continue to be creative really spoke to why we’re here today, Girl Scouts is about creating gender balanced leadership, it just shows them there are a lot of careers and opportunities that they can follow, it was awesome to see Chloe actually speak to them and inspire them to be more creative and dream.”

Doctor Who themes resonated throughout the convention and the main event in day two was the panel with Captain Jack Harness himself.

Barrowman held a Q&A panel for LBCC attendees and revealed comical stories about his experience behind-the-set of “Doctor Who” and “Arrow” but wouldn’t budge on a question about a Green Lantern/Arrow transition to the show essentially not commenting on the question.

As the Long Beach Comic-Con continues to become more concentrated it doesn’t feel as overwhelming as other conventions.

Actress Maitland Ward, famously from the television series “Boy Meets World,” is a local in the Long Beach area and was showcasing her Slave Leia cosplay attire but described this year’s LBCC15 as drastically different from years past.

“Long Beach is becoming a mainstay in the whole cosplay universe and comic-con world. In other cons you don’t get to interact as much but here it’s more of a hometown feel, you do see kids making costumes, families coming and you can really talk to people it’s not such a massive group. I like the feel, it’s big enough but not too big.”