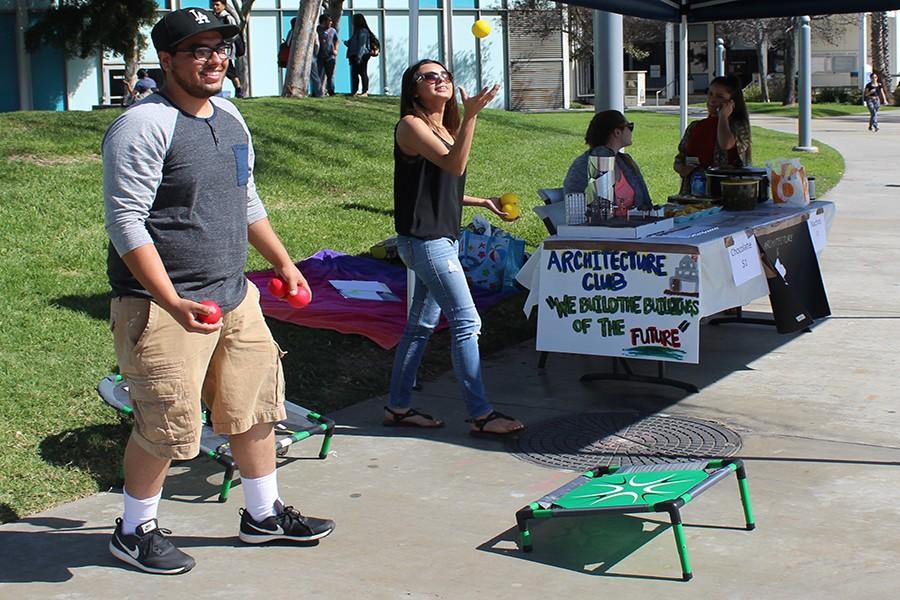 Architecture and technology club members, Jesse Magellan (left) and Krisandra Perez (right), set up a game for their fundraiser. Funds raised from the fundraiser will go towards an event for the students. Photo credit: Briana Hicks

Over spring break, on Tuesday, Mar. 15 the Architecture and Technology Club will be flying to New Orleans, Louisiana to get hands on experience studying the culture’s architectural designs.

The club was awarded money to help fund the trip from student senate, ASCC.

She said, “We received the money by making legislation, which the student president helped us with, and getting on the agenda to present to senate, and they approved.

“The money comes from their special projects budget. They funded roughly $18,000 for our trip. The money is mainly going toward trips to architectural museums,” she admitted.

Architect and Technology club adviser, Peter Phinney, admitted that the reason why they chose the city was because they have amazing 19th century architecture in the “French Quarter,” as well as domestic architecture along Saint Charles Street.

The “French Quarter” is located on top of a crescent in the Mississippi River. It is the city’s oldest neighborhood. The neighborhood brings a blended architectural style of Spanish, French, Creole, and American.

Phinney said, “We will tour two significant buildings, Longue Vue in the city, and Oak Alley Plantation in the country side near New Orleans.

“Longue Vue is a fully example of early 20th century residential architecture typical in the American South,” he explained.

He also went into detail about how the Oak Alley Plantation would be of great significance to the club.

He explained that the plantation is an antebellum [slave era] house that was a sugar cane plantation back in 1830. The house includes the original slave quarters and extensive grounds.

Phinney expressed, “We will sketch the house and the grounds, which include 28 majestic, 300-year-old oak trees mirrored by the 28 two-story columns that surround the house.”

The club will be spending a lot of time walking through buildings, to get a feel of the structures, and sketching a lot of the city’s culturally designed buildings.

Perez stated, “So we’re going to go to a WWII museum. Our advisor is an architect himself, so he’s going to be telling us how to sketch stuff. We’ll learn to really capture things in the moment, and pay attention to important details, which is important to an architect.

“Sometimes when we have to go to the construction site of our building, we might have to tell them ‘oh, I don’t like how you’re doing this, can you do it like this?’ We have to jot [sketch] it down quickly for them,” she said.

The club will also explore the culture of New Orleans.

They are going to tour preservation hall, known for jazz clubs along Bourbon Street, take an airboat tour of the Louisiana Bayou, and visit some voodoo sites, which New Orleans is famous for.

Perez acknowledged the club is fundraising to plan a special event for the students. She said, “Right here on Falcon Square, we’re going to bring New Orleans to you guys [students].”