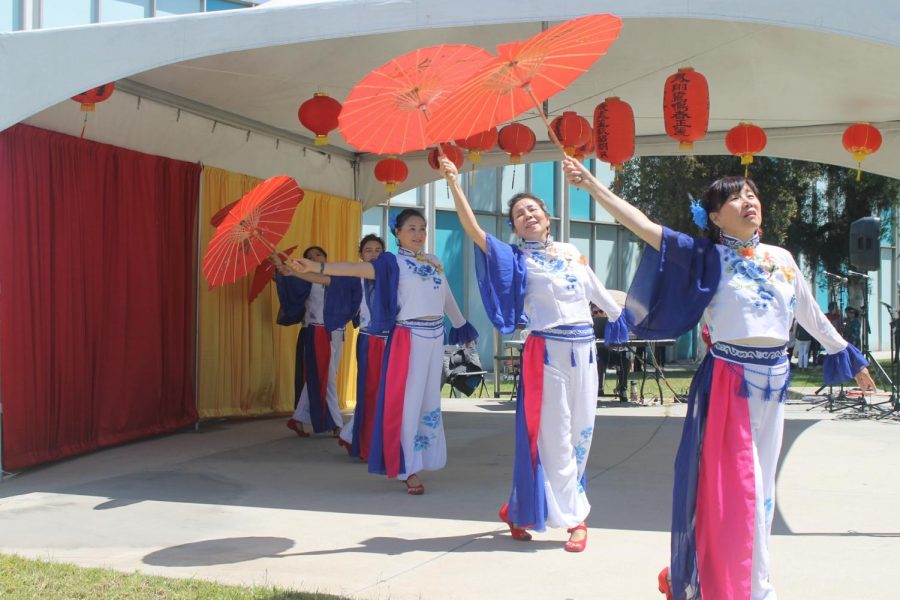 Performers demonstrate a traditional rain dance at the Falcon Amphitheatre. Students were able to learn more about other traditions at Festival of Asian Cultures.

The annual Festival of Asian Cultures made its appearance for the fourth time on the campus of Cerritos College featuring food and performances by city of Cerritos community members April 18.

From 11 p.m. to 1 p.m. performances could be viewed from the campus amphitheater while food from various Asian cultures were available for sampling in Falcon Square.

Panda Express was one of the booths present, giving out food to patrons and college students.

Trustee Shin Liu, who organized the festival said, “I feel right now it’s a global village and now we have people come from different countries moving here […] just in Cerritos we have so many diverse ethnic people live here so I want the people to appreciate each other’s culture so we can live in harmony and understand each other, we’ll be happier. ”

Liu thinks the festival provides an opportunity for students to explore “these different cultures, different foods so when they go to restaurants at least they know how to order food.”

The Cerritos College Chinese Club ended the festivities by performing a lion dance and a Chinese tradition of receiving red envelopes, Hong Bao, from President Jose Fierro and trustee Liu.

The red envelopes were intended to give good luck to the Cerritos College campus.

Chinese instructor and club adviser Yiran Zhou states, “I organized this performance in collaboration with Cerritos Chinese School […] they emailed me and asked me if I had any students interested in doing the lion dance.”

Zhou in turn emailed his students with the opportunity to perform and earn extra credit.

Zhou feels that if students are learning the language, they should be learning about the culture as well.

Zhou states, “I think this kind of event is really useful, helpful, for students to learn about different cultures, particularly for my students who learn Chinese and want to learn more about the culture […] that’s what they did, by doing that, they feel connected with this culture, they further appreciate this culture.”

Bustamante recounts dance rehearsal, “It was on our off-time, we would coordinate because it was five of us so it was kind of tough because of our schedules so we would meet up on Saturday morning at the park with one of the instructors, it was funny because you are at the park with a big drum making loud noises and there are kids on one side of the park hitting pinatas and it’s funny because we are all predominantly Latino and you see us in Chinese wardrobe with the lion, the dragon heads and the drum.”

Due to conflicting schedules, the students practiced a total of two hours during the course of two rehearsals.

Bustamante said, “It went really well, it’s loud and it’s colorful, and a lot of movement so it’s kind of a good way to end the festival with the lion dance […] and then going into the crowd afterwards when you are done so people can take pictures so it was something nice to do.”

Olivia Garcia, early childhood development major, stated her thoughts on the festival, “It was really interesting to learn about the different cultures. We don’t really get to learn about them that much so for people who are from different ethnicities and cultures come here to educate those who want to know, it’s really cool.”