Second Break the Cycle forum expands on the first forum 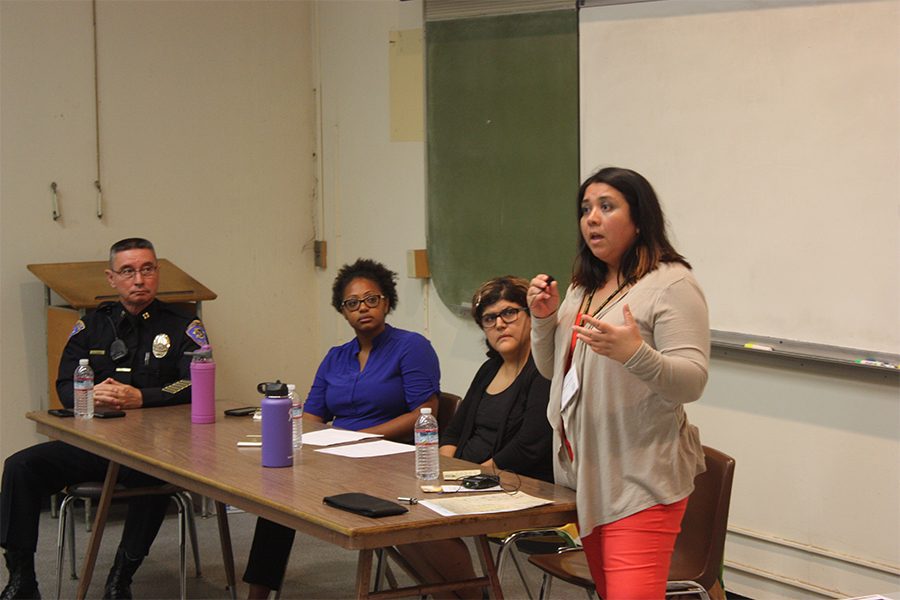 The second session of the Break the Cycle forum was held on Wednesday to further spread information regarding sexual abuse and add additional information from the previous forum.

The panel picked up right where it left off during the first session, conveying knowledge to the audience while the audience engaged itself in the discussion.

Pauline Acosta, an instructor of women’s studies as well as sociology at Cerritos said,”I think the students were interactive, I think they asked really good questions and it shows that they are concerned.”

Director of Diversity and Compliance Valyncia Raphael felt comfortable with the size of the forum.

She said, “We were able to have a really deep conversation that, if there were more people, we might not have been able to have.”

All panelist enjoyed the experience and are very open to being a part of the next forum.

Humanities professor Julie Trager hopes that the concept will be something that will carry on from semester to semester to bring to life different issues that affect students on campus.

The next forum will be addressing the masculine side of sexual abuse.

While the first two did somewhat address the sexual abuse of men, it was primarily focused on women and transsexual individuals.

Acosta, who is also an adviser of the Gender Equality Club, was excited about the prospect of holding a forum focused on male sexual abuse.

“I love that they are going to do masculinity at the next panel, I think it will be really great,” she said.

Each member of the panel extended various means of resources to the audience in the form of phone numbers, e-mails, brochures, and business cards for the audience to take home.

The panelist went over the same general information given in the last forum with the addition of a few new topics that were suicide, cyberbullying and gender.

Psychology major Beatriz Roldan believed that the forum was informational and eye-opening.

“The topics are very interesting, I think the idea that a victim doesn’t know that they are a victim is surprising,” she said.

Strand discussed the services the campus police can provide to students as well as answering important questions regarding the definitions of laws, the statute of limitations, as well as informing the audience of programs like R.A.D.

R.A.D. stands for Rape Aggression Defense and it is a class for women and transsexual individuals, where they can learn to defend themselves both verbally and physically from sexual assault.

Lopez was able to reiterate some of the information regarding the LBTRC for those who didn’t attend last week but was also able to answer new questions as well as provide input during the discussion.

Acosta acted as the moderator during the forum and used her time to speak as an opportunity to engage the audience in a passionate conversation covering topics such as gender and discussed why a person might stay in an abusive relationship.

Dr. Raphael, who has been present for both Break the Cycle forums, provided information regarding the topics discussed.

Raphael is hands on with students who are dealing with sexual abuse problems on campus and during her time at the forum discussed the process that students can follow and the resources she can provide them with.

Raphael was adamant in explaining that a big part of her job is to create an educational environment for students with no barriers.