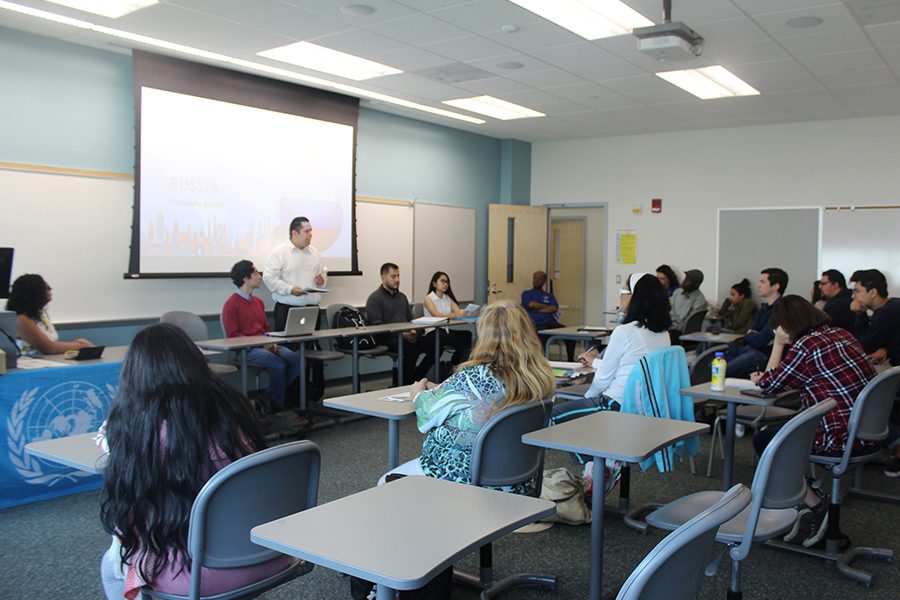 Model United Nations held a simulation regarding the Syrian refugee crisis in Europe seeking solutions to this crisis through diplomatic negotiations.

History major Daniel Shirreffs said,”I thought it was really interesting, first time I attended a workshop, I’m very interested in politics I’m not as well informed as I wish I was. It was a really nice way to learn about global warming.”

The delegates who represented Turkey, Switzerland and Russia gave a speech on the perspective of the country they represented regarding the Syrian refugee crisis.

The delegates stated what their countries are doing to address the problem, as a global issue, Model United Nations President Carlos Diaz Soto and Secretary General of Training and Chairwoman of the Committee presided over the presentation.

The following points were talked about:

Those not present for motions were:

Soto said, “We are here not only to debate the topic [Syrian refugee crisis], but also to come up with solutions regarding this crisis in that region, we simulate exactly how a lot of nations work by making speeches by debating by having conferences and writing a resolution at the end of the day.”

He continued, “We have a Santa Barbara conference this weekend to do the same thing, we represent Cerritos College in different communities. There are hundreds of student who are going to be participating from other universities and we are there to compete, represent Cerritos college, and do our best job possible.”

Guerrero said, “We are trying to let other people to know about the Syrian refugee crisis, it’s been called the largest refugee crisis in history recently, and I think in 2014 it was said in United Nations [it] is affecting countries in the region.

Political science professor Sunday Obazuaye said, “Students who could not make it today they missed a lot, and what they missed is the information about the Syrian refugee crisis in how the countries of the world are making effort to resolve the problem in a diplomatic effort.

“Diplomacy requests a lot of negotiation, a lot of debates, thinking about solutions other than military, so that’s what diplomacy advise is about, the effort to solve problem without using military force.”

Obazuaye continued,”That’s what is going on in United Nations, today’s simulation it is difficult but is doable, and the first step is to help the millions of people who are being displaced from their homes, through humanitarian effort and assistance it’s going on by different countries United States included, Jordan, Lebanon, Turkey and many other Middle Eastern countries are providing assistance.”