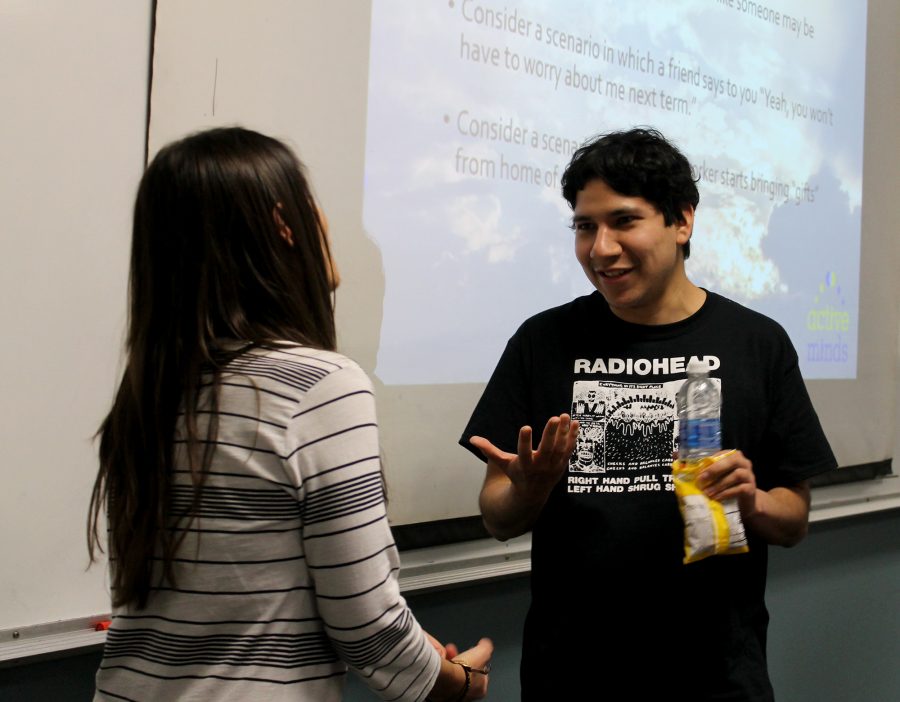 Alumn Ricky Beltran talks to Califronia Program Manager for Active Minds Becky Fein. Beltram stated that he knew Fein had a "great understanding of suicide prevention" and that was his reason for attending the event. Photo credit: Benjamin Garcia

As a result, on Tuesday, Mar. 7 Active Minds hosted a suicide prevention workshop in SS-141; connected to Each Mind Matters; funded by the California State Mental Health Services Authority .

According to social work major Rebecca Johnson who is the president of Active Minds at Cerritos, the name of the suicide prevention workshop was QPR, which stands for “question, persuade and refer.”

Fein stated that Active Minds is working to change the conversation on mental health on college campuses. The event on was all about building advocacy among students, awareness about suicide and concern from everyone involved. The goal is to train people to learn the warning signs so as to prevent suicide.

Active Minds adviser Christian Maldonado said, “I really have to give all credit to the students. They’ve been really active, no pun intended, […] but they really have put this together well, reaching out with the support of the Active Minds National which was able to send […] Becky to do this.”

During the presentation, the speaker addressed myths — replacing them with facts about suicide and suicide prevention because “misunderstandings are rampant.”

According to Fein, these myths include committing suicide is inevitable and if someone is going to do it, there’s no way to prevent it.

The reality is that suicide is preventable if someone has the right tools and knows what to look for and how to give the support that someone needs and asking people about suicide plants an idea that wasn’t already there.

Asking someone directly about how they’re feeling or what they’re going through is shown to lower the risk of the impulse effect.

The speaker went on to say that when preventing suicide, it is important to engage with the person who is suicidal on a deep level; show them that you care, show them that they’re not alone and help them get the love they need.

Speaking about the recent suicide of loved Fine Arts Communications Division Performing Arts Promotion Specialist, Renee Bloch, Fein said that it is a coincidence that this event is here soon after however, Active Minds has what they call “post prevention materials” for when a campus loses someone to suicide; and went on to say that there are ways that campus can respond responsibly, which include: addressing the matter and getting the support that they need to other people who are struggling and getting posts on social media about the matter so that people are getting support rather than getting that solution themselves.

Fein added, “I would want people to know that if they’re struggling there, are great resources available to them and to reach out to Active Minds if they need to. I think that is the best way to honor the memory of someone we lose, by making sure we are getting the support we need.”

The speaker also explained how the media, such as college newspapers, can help prevent suicide. She said that discussing resources in prevention awareness would be “such a strong thing,” as well as communicating about mental health to help, that it’s okay to not be okay, you’re not alone and there’s help available; adding that newspapers could be a great conduit for positive messaging and offering help in a preventive way rather than only in response to tragedies happening.

She said, “Let’s prevent it by making it a normal thing for people to talk about.”

Alum Ricky Beltran said that he attended because he knew that Fein had a “really great” understanding of suicide prevention. He wanted to attend when he heard about it last week at an event for eating disorder awareness week.

Maldonado stated that he would like to invite everyone in the community to come to the meetings (4-5 pm on the first and third Tuesdays of each month in SS-141) to continue these conversations around mental health.