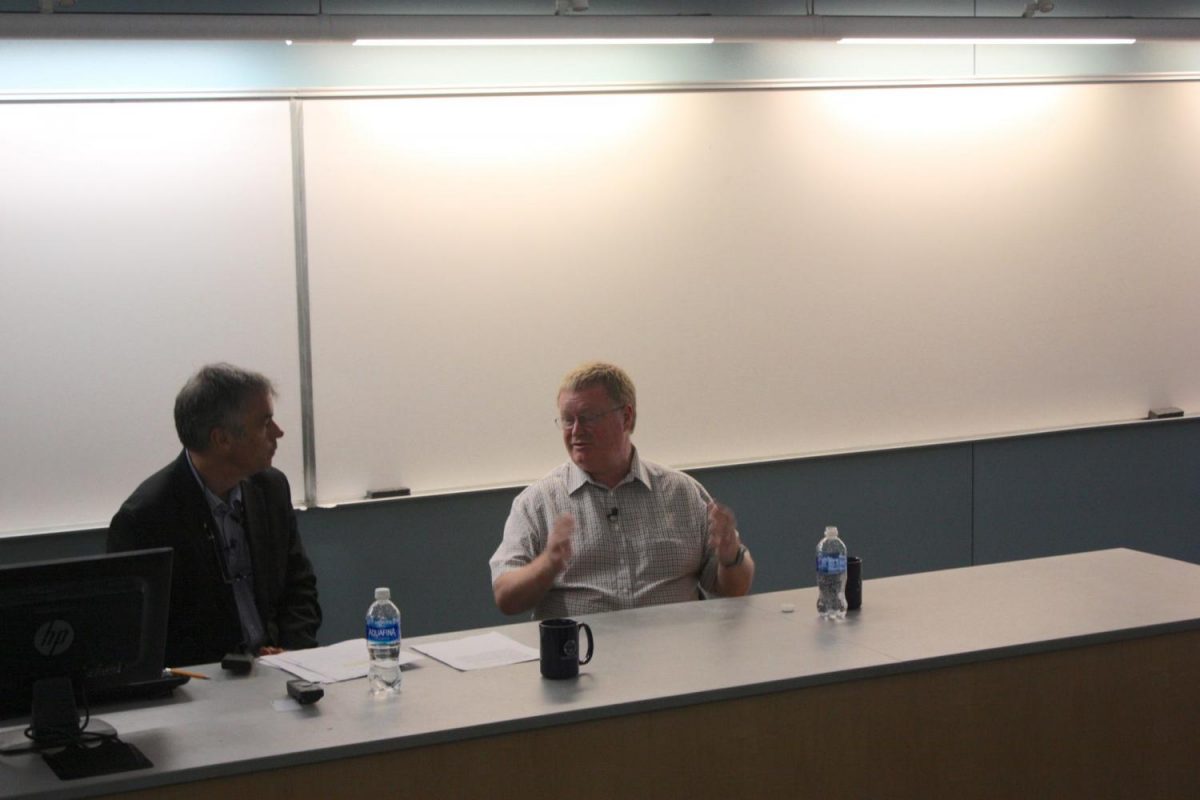 History Professor John Haas asked questions to scientist Dr. Michael Gunson about climate change. Both Professor Haas and Dr. Gunson were surprised and delighted about the number of students that showed up. Photo credit: Rocio Valdez

Climate change is something that is ongoing in Earth and to discuss this topic Dr. Michael Gunson, OCO2 (Orbiting Carbon Observatory-2) project scientists from Jet Propulsion Laboratory, was invited to Cerritos College Sept. 28.

John Haas, history professor, organized the presentation for students to get information from a scientist that can provide facts, evidence and data and that way students can become aware.

Through OCO-2 that launched on July 2014, Dr. Gunson has examined global measurements of carbon dioxide in the Earth’s atmosphere to gain an understanding of how fast it will build up in the future.

The greenhouse effect is impacting our Earth due to the exchange of radiation and the gases that gets trap in the Earth’s atmosphere which warms Earth.

Humans produce carbon dioxide that is added to the atmosphere, which about half of it remains in the atmosphere and the other half is being observed by the oceans and land.

Dr. Gunson shared that he and his team wanted to get clear images from space, but to do so they would’ve had to get rid of the effects in the atmosphere, so instead they used the effect of the atmosphere on imagine to measure the amount of carbon dioxide and to understand where the gasses come from, measurements of different locations where needed.

“One of the most important records we have about climate change is the sea level rise,” stated Gunson.

Earth’s damage also impacts us directly; people are migrating due to lack of agriculture, like in Africa, they are moving somewhere they can find food.

The recent natural disasters, hurricane Irma and Harvey, earthquake in Mexico, and wildfires in Calif. are also something to think about.

Scientific method is essential to understand all of this and allows us to relate to science and provides scientific insight through observations and explanations and it all starts with a hypothesis that is simple and can be tested.

Both Professor Haas and Dr. Gunson were surprised and delighted about the number of students that showed up.

“One of the greatest challenges as a society is to become well informed and climate change is one of the most important things that is affecting us today. This is the next generation to run the world, I want them to be as well informed as possible,” Dr. Gunson said.

If someone does not believe in climate change Dr. Gunson encourages respect for everyone’s beliefs but stated the fact that the scientific method doesn’t require believe, human reaction, observations and facts are robust and the fundamental hypothesis that human activity is leading to an impact of the world through increasing temperatures hasn’t been refuted yet.

Professor Haas, “the goal is to get students aware, I don’t think time is on our side and it doesn’t mean we can’t change things but this is not the time for hesitation it’s time to start moving.”

Kristina Rivera, anthropology major, attended because she was not informed about climate change and thought it would be informational.

“I learned a lot about greenhouse gases and effect; I wasn’t really aware of the amount of evidence that shows it impacts the world,” Rivera said.

Alyssa Perez, liberal studies major, said “I didn’t know too much about global warming and I realize it’s a really big issue, it makes me think about the way I live and how I should change to make the world better.”

Stephanie Guevara, elementary education major, was already informed of climate change through her geography class, “I think our generation should have more research and learn on what’s happening around us;u have we take it for granted.”