Popcorn and A Movie: Discussing the representation of women in film and in the media 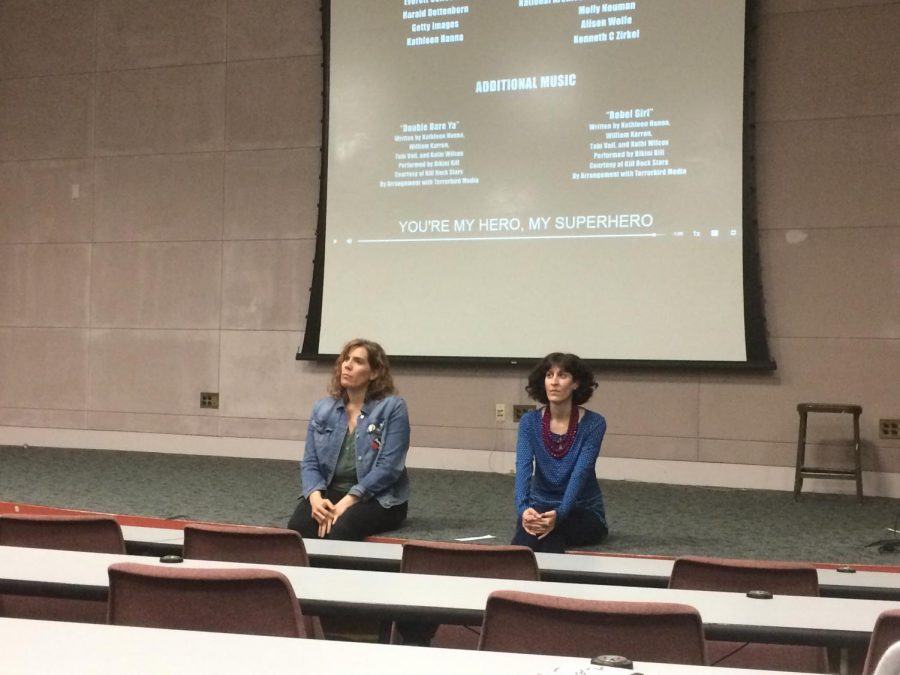 Erin Cole and Ja'net Danielo have a discussion with students after the Wonder Woman documentary. Cole, Danielo, and students explore and discuss topics covered in the film and regarding female representation.

Continuing with the events of Women’s History Month on campus, Popcorn And A Movie featured “Wonder Women.”

The Untold Story of American Superheroines. Alongside the film, a discussion was also held afterwards concluding the event, led by English professors and Safe Zone committee members, Erin Cole and Ja’net Danielo.

Starting at 5 p.m. in LC 155 on March 29, the documentary film chronicled the launch and legacy of the Wonder Woman comics. It even showcased how representation paved the way for future female heroines, how societal views regarding women were at the time, and how the roles of women changed overtime, parallel to the wave of female heroines.

“I really liked it because, it showed how important it is to have women represented…and it gave me a better view at how women are represented… ” mentioned Yami Lara, undecided major, when asked for her thoughts on the film.

Afterwards a discussion was held further exploring the topics surrounding the film, such as female representation/heroines in the media, and how societal views and expectations impact women.

“What female heroines do you look up to?”

Coordinators Cole and Danielo sparked discussion by stating this question, sharing examples of their personal heroines from the legacy of Princess Leia and “Wonder Woman” to the heroines of today, such as Shuri and the other women of Wakanda from the recent film, Black Panther.

Branching off from that, students shared their thoughts on the impact of female heroines and why it’s important for young women to see themselves represented in film.

With the Wonder Woman documentary discussing the impact of female heroines parallel to advocation of women’s rights, how society’s views of women changed over time, and progress for female representation, students shifted the conversation to body image and the critical view of women in media.

From the expectations of body image through social media, advertising, etc. to discussing the societal views of men in comparison to women, many mentioned that while progress has been made, there is still much more to be done.

When asked about what inspired them to choose the Wonder Woman documentary, Danielo mentioned, “Erin and I are running the Safe Zone committee and we were trying to come up with events that were somehow connected to diversity. So we thought ‘Okay one that highlights women would make sense and it’s a way to engage them in a conversation about something really important…A co-worker actually recommended it. It’s not too long and great for being able to have a lengthy discussion afterwards…”

In regards to a quote from the documentary that stuck out to many afterwards, especially Danielo (in which the creator of Wonder Woman, William Moulton Marston, said that within the next 100 years he sees America shifting to the beginning of a matriarchy), she mentioned “…I hope we can get to the point where we can be just as powerful…”

Additionally Danielo continued to say, ”A lot of women in the room brought up really good points about all the things that need to change and how long that change takes…”

With the events of Women’s History Month continuing into April, the next film and discussion held in LC 155 will be on April 3 from 5 p.m. to 7 p.m. for Hidden Figures.