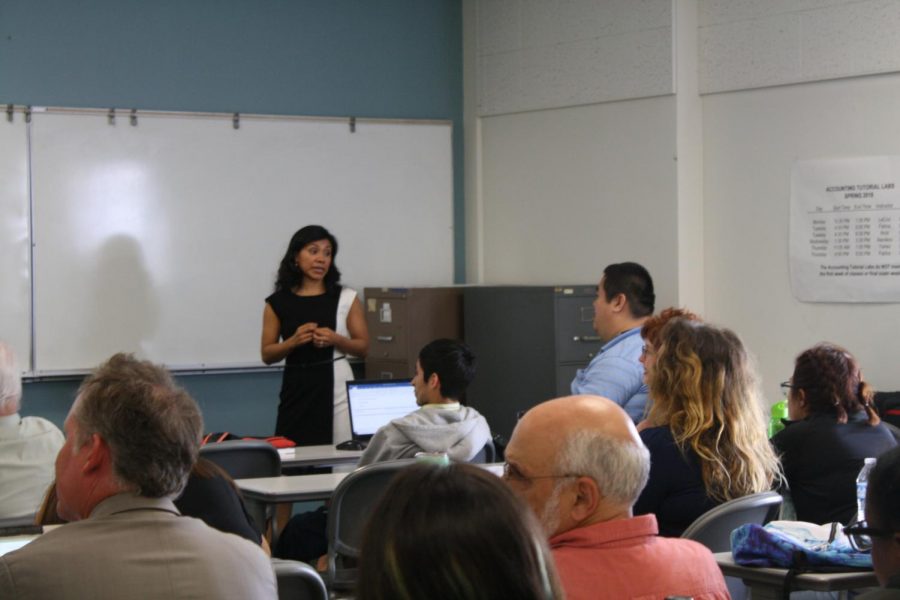 Beatriz Sosa-Prado explains the issues on gender gap, life expectancy and diseases. She also discusses how they affect minorities and genders.

The difference on equality and equity in gender, health care and social justice were some of the topics that were touched by professor Ralph Casas and Beatriz Sosa-Prado in the Women’s History Month information class on April 24.

The lecture went on about the unjust system in gender gap’s between men and women, health care bias and neglect, as well as social justice.

Student Aviance Garcia, Pharmacy Technology major, was in attendance, saying she took “Interest in knowing information that affects her health and community.”

As well as being a Pharmacy Technology major, Garcia says that health is important and knowing the complications people can have is important too.

“Where you live in most predictive about the health care you, and your family receive,” said Casas. Meaning that people’s zip code has an effect on what type of diseases are common in that area.

But the zip codes alone do not look closely as to what diseases and health complications people are prone to, according to Casas.

Casas calls for a “Solution for the whole country, but we need a solution for diseases in East L.A.”

Ideally, it would be more accurate if there were more research into the cities gender and ethnicity, rather than going by a national study to determine common diseases in minority areas.

Asking the question, “Why are we sick?” Casas said the issue is the “Number of liquor stores and fast food locations” all around the corners.

Access to quality healthcare is most common in Latinos and African American people, with 69.9 percent and 80.6 percent said, Casas.

Resulting in poor health for those who are unable to receive the health care they require. As well as adding the neglect for people seeking a provider.

Which brings to a point Casas had made that there is a bias which is some people experience better quality in health care based on ethnicity, gender, income, are or even who they know.

Casas said, “The man (pointing to a picture of a white man) will always be taken care of first” in health care. Then a white woman, then a colored man and lastly, a colored woman.

This bias goes on and continues into gender gap’s and differences in health in women and men as Sosa-Prado further explains.

Sosa-Prado explains that women have a higher risk of cardiovascular health but their symptoms are dismissed because they’re not the same as men.

Which brings the point, as Sosa-Prado said, that health treatment in women and men comes from medical bias.

But the gender gap is not only in health, it also presents itself financially and in the LGBTQ+ community as well, elaborates Sosa-Prado.

Men are always paid more, and the reasoning is men go for the engineering job, while women are teachers and social workers, thus the reason men make more money, said Sosa-Prado.

Even so, Sosa-Prado says Harvard conducted a study and even if women were put into high ranking positions, they would only make up 15 percent of the discrepancies.

Proving the point that it is not on the profession women chose, says Sosa-Prado, but that men will always be paid more than women.

The gender gap also has an effect on the LGBTQ community, labeling them as “sexual minorities because of their health disparities,” said Sosa-Prado.

Quality health care, neglect and gender gaps are unjust in our system and Sosa-Prado’s hope is for students in the session to further their education and continue to research as to why those problems continue to resurface.