WHM: Women’s rights in the Bible 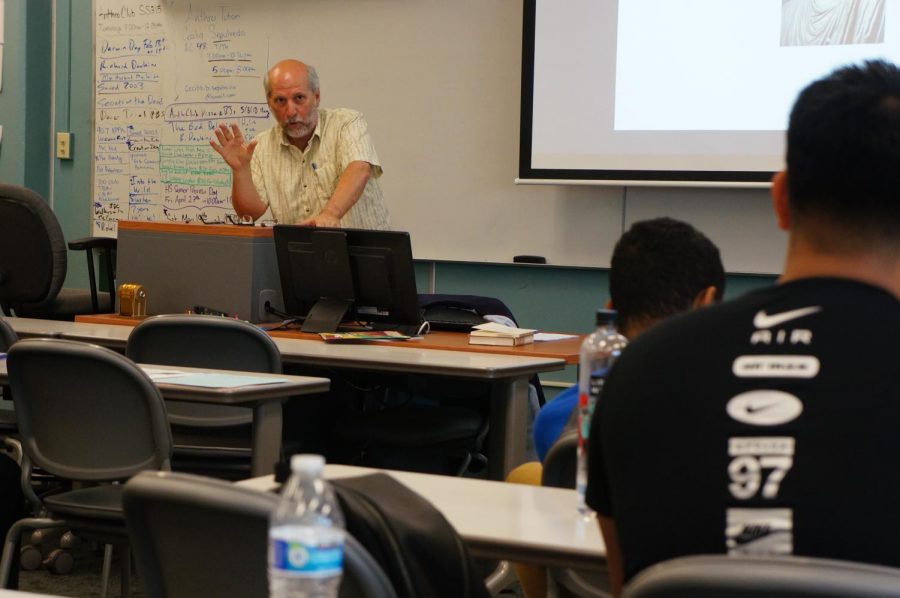 A presentation that concerned the role of women in ancient time’s faith movements was given at Cerritos College by professor Ted Stolze this past week.

The actual name of the presentation was, “Coworkers of Paul: Woman Leaders in the Early Jesus Movement.”

According to the Woman’s History Month 2018 program, “This session looks at the role of such women as Phoebe, Chloe, Priscilla, and Junia in establishing and maintaining the new communities that arose- especially in Asia Minor, Greece, and Rome – from the first-century “Jesus movement.”

In particular, we note that Paul’s letters stress the co-equal role of women as organizers of, and leaders within, these communities.”

The presentation was part of a series of presentations given by the school to observe Women’s History Month.

It was coordinated by the Philosophy Club as well as the Gender Equality Club and was presented to students on April 26.

Stolze had attended the Claremont School of Theology in the 1980’s. It was here where Stolze studied with biblical scholars.

Stolze describes his understanding of the Christian Bible as “Reading the Bible critically, which means not interpreting it necessarily literally.”

According to Stolze, the purpose of this presentation that he gave was to address the possible misogyny found with in the Bible, particularly in the writings of Paul.

“I wanted them (students) to have a fresh, critical approach to the New Testament. To see that Paul was a first century advocate for equality to overcome gender hierarchy”.

Stolze gave a brief background to Paul, a man who brought the Jesus movement to much of the ancient world and who’s writings made it into the Bible, He identified Paul as an integral part and a founding figure of the early Jesus movement in the first century.

He then pointed out passages of the Bible’s New Testament, which is the part written after the story of Jesus, which, according to him, seemed to put down women’s place in this early movement.

Some of these passages included parts where women were required to be quiet in churches, or not cut their hair, or being a servant to men. The main part being that these passages seemed, at face value, to show women were being described as second class citizens, according to Stolze.

However, Stolze countered this by saying that the misogynistic passages were in fact quotes from others whom Paul disagreed with, which was unclear to readers because of the translation.

He argued that Paul was refuting those passages, and using them to diatribe, or strongly argue against, them.

According to Stolze, Paul even worked side by side with and supported women in the early Christian congregations.

According to Stolze, though Paul had begun the support of women, there was still a long road ahead for them. “Paul wanted women to be equal. Unfortunately some of the communities which he had helped set up, their people lapsed back into the dominate cultural norms, the hierarchy.”

Stolze said that although Paul is stressing the opposite, “The tendency was for even new followers of Jesus to not see how radical the change Paul was asking them to make.”

He concluded the presentation by saying that Paul was a supporter of gender equality, and spoke out against it, thus providing a start for women to be a better part of the world around them.