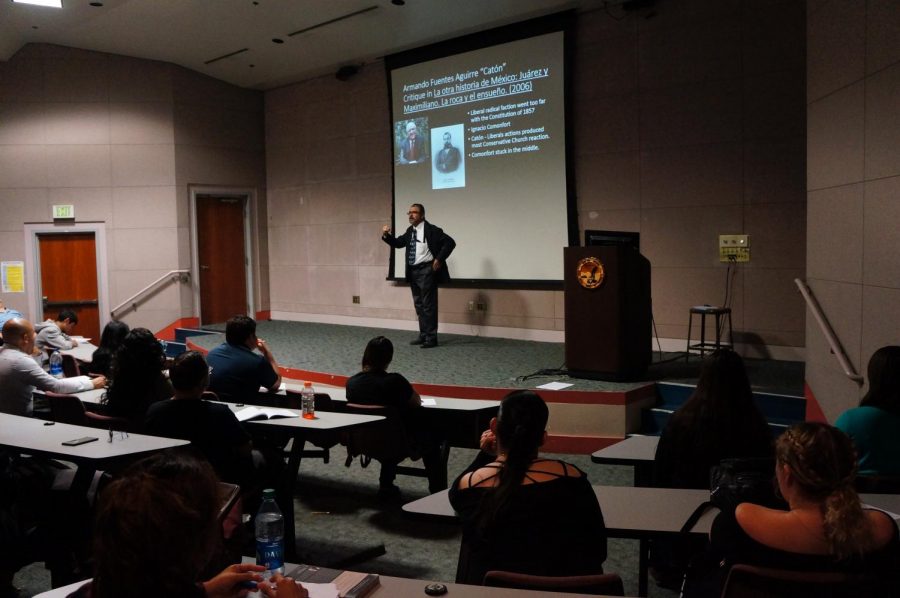 Walter Fernandez, history professor, talks about the origins of Cinco de Mayo. The presentation was on May 3.

A presentation that informed students on the origins of the Mexican holiday, Cinco de Mayo, was given by the History department and presented by history professor Walter Fernandez, which took place on May 3rd to honor the holiday’s approaching date, in the college’s Teleconference Center.

According to Fernandez, the presentation was given to help students better understand the origins of the holiday to have a better understanding of the culture and climate that led are related to the traditional Mexican holiday.

This year’s presentation focused on the Mexican conservatives, who Fernandez described as the ones who lost the war. According to Fernandez the conservatives were a group of Catholic elitists who favored centralized government, and were seen as the bad guys of the war.

Fernandez also expanded on what the holiday was celebrating, explaining that it was in honor of the first Battle of Puebla, which took place in 1862 on May 5, in response to an attempted French take over of the city of Puebla, which the French ended up losing.

He described it as a Mexican Civil commemorative date of celebration, and showed pictures of performances, parades, and other celebrations in the city of Puebla, where much of the holiday celebration takes place in.

He also explained that the celebrations also took place in gold rush era California in response to news of the victory in Puebla.

During the presentation, students were given the opportunity to listen to period appropriate music.

Students were also shown various paintings, pictures, and portraits of the different locations and people involved in the history of Mexico that led to the foundation of the holiday.

The presentation itself was very heavily attended, with students filling up almost every available seat that was in the Teleconference Center.

Brianna Davis, who was a student in attendance at the meeting, said of the focus of the presentation, “I think it’s important to look at all sides of the story, with the Mexican conservatives.”

Davis also stated that the Mexican conservative side of the story was interesting to learn, and that it was also intriguing to learn a new fact of the holiday.

Sally Havice, a faculty member and colleague of Fernandez, was also in the audience of the presentation.

Havice said of what the presentation taught, “There is always something new to learn. No one person can know it all. Education like this provides an opportunity to change the way we think. With that knowledge there is a creation of new wisdom.”

According to Fernandez, he gave the presentation to give a history of the holiday, saying, “It was primarily to show students what Cinco de Mayo is, and to show that it was a complex story on both sides.

“This has been done for the past twenty years, and it’s been different every year. I certainly want to impart an interest in explaining and expanding history. Not just for Mexican history, but for all history, it’s all interconnected.”