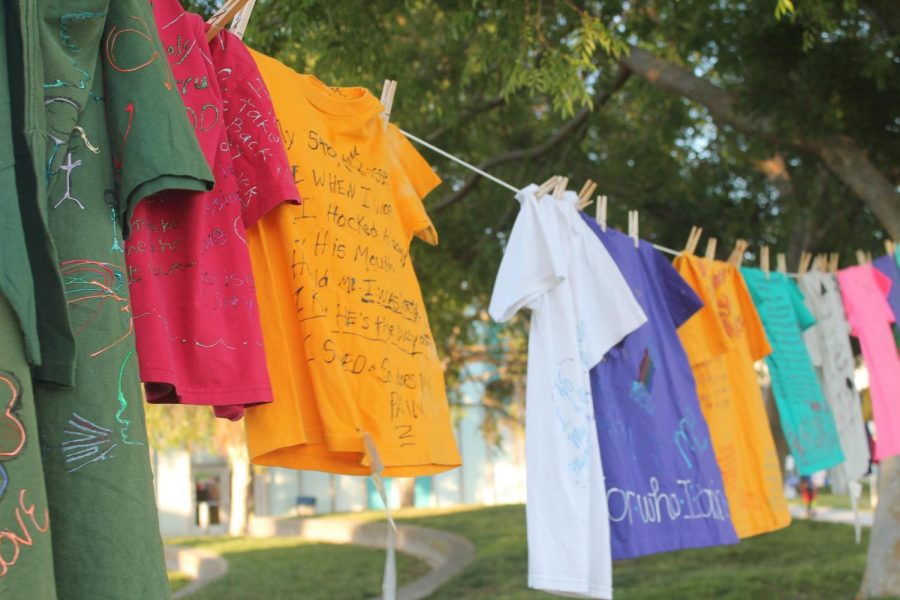 The Clothesline Project was displayed behind the resource booths at Take Back the Night. This idea consisted of shirts given by sexual assault survivors, with their stories written across them.

As part of Sexual Assault Awareness Week, Take Back the Night 2019 was a day-long event on April 10 dedicated to providing resources and taking action against sexual violence.

“This year’s ‘Take Back the Night’ had a full day of action,” stated Valyncia Raphael, director of Diversity, Compliance, and Title IX coordinator in human resources.

According to Raphael, the day started with local freestyle and graffiti artist, “Man One,” whose work aimed to get more men into sexual violence prevention. With participation from Woodworking, the work was displayed in Falcon Square for all to see.

The Clothesline Project was also displayed on campus, where survivors submitted clothing with their stories written across them. The shirts were hung on the hill behind the resource booths set up for the students.

The resource fair commenced and students were welcomed to enjoy free tacos and learn of the many resources available to survivors and allies alike, such as: Casa Youth Shelter; YWCA Los Angeles; and Cerritos College Counseling.

With these resources, survivors had access to free counseling, 24/7 support hotlines and assistance with taking action against abusers.

“Some even have support for survivors and their family,” stated Raphael, “Most of the time we talk about sexual assault, we think it happens to a certain person. We want to spread awareness that this is something everyone should be concerned about and we have a role to play.”

The annual Take Back the Night march started at 7 p.m. where 20 students joined Raphael and Ashly Campbell, the student responsible for bringing the event to Cerritos College, and chanted, “break the silence; end the violence” throughout the campus.

Campbell stated that the march is a very big deal for survivors such as herself.

“It gives me a chance to go out there and show that I am empowered,” she explained, “Hopefully other people get that same feel from it.”

After the march, the students then gathered for a candlelight vigil where they listened to the stories of survivors willing to share them.

Trigger warning signs were displayed and survivors were reminded that they were not obligated to go up.

For the ones that did, support was shown through applause, hugs and reminders that they should not think of themselves as survivors, but as warriors instead.

Cerritos College’s Take Back the Night was started in 2017 when Campbell introduced the idea to Raphael with her friend.

Campbell explained that Take Back the Night is an event that is usually held at universities, but felt that it should be accessible to community college students as well.

“I felt like it was unfair I had to leave my own campus to put myself in an environment where I felt supported,” she stated, “We should have that here. We’re all entitled to have that type of atmosphere.”

Giovanni Flores, a student senator, marched alongside Campbell proudly and agreed that this event is important for the students of Cerritos College.

Of the many resources available, Flores reminded the students that campus security is available to escort students to their cars at night if they’re ever put in an unsafe, uncomfortable position.

At the end of the night, student feedback was received through surveys given out at the event.

Take Back the Night is expected to continue as an annual event, with more ideas to come in the future.

“We can only move up from here,” Raphael stated, “Every year has just gotten better.”