The Spring Concert- a joyous tapestry of music, history and more! 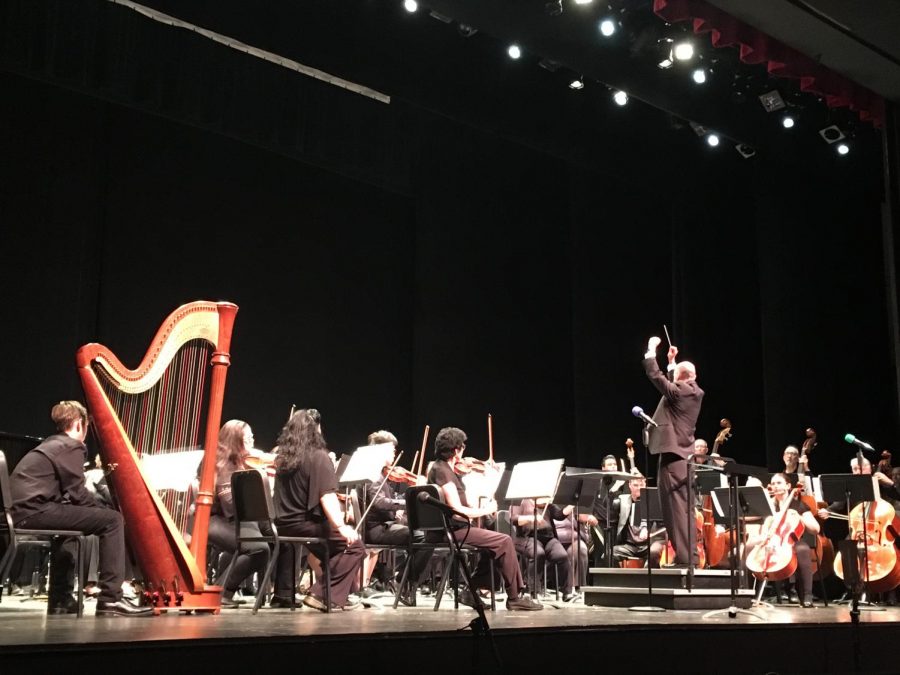 It was a night of beauty, tribute and surprises. On Friday, May 17 Cerritos College Music Department and The Associated Students presented ‘A Spring Concert’ with the Cerritos Community Choir, Orchestra and Concert band.

Dr. Andrew Maz- the chair of the music department- introduced the night and the concert began with the angelic voices of the Community Choir.

The first piece brought to life on the stage was, ‘Choose Something Like a Star,’ by the composer Randall Thompson with text by the fabled American poet Robert Frost.

From the moment that the choir hit the the first few high notes I was transported back to the innocence of childhood and memories of magical times like Christmas.

The choir conductor, Dr. Anna DeMichele, then introduced the next 4 songs as, “A series of water pieces about God and how he guides us through turbulent waters.”

The first song in the series was entitled ‘Ocean and Stars,’ with lyrics such as, “Friends and rivers go where they must go, leaving us waiting, and when they return they tell us stories, stories of oceans and stars,” the audience was visibly moved.

The next song, ‘By the Stream,’ was composed by Cerritos alumnus Breonna Taylor, who went on to study composition at Mills College but returned to Cerritos for this proud moment. Ms. Taylor was identified by Dr. DeMichele amongst the sopranos.

Next, came the Cerritos Orchestra conducted by Mr. Alan J. Hallback. They opened with a lively piece by legendary Russian composer Nikolai Rimsky-Korsakov.

The piece, entitled Dubinushka, a march, was the perfect choice to showcase the power of the orchestra right out of the gate.

Just before the 2ndpiece the audience was treated to a bit of a surprise when Hallback explained that the piece about to be performed, ‘The Blood of the Soil,’ was written in tribute to William Mulholland, the legendary water magnate, responsible for creating the 230 mile long aqua-duct from the Owens Valley that made the City of Los Angeles possible and that the composer, Colin Sprigg, was in the audience.

They then turned the house lights up in an attempt to identify Sprigg but he wasn’t where they thought he was and so as the speculating began an older looking gentleman with a kind of travelling suitcase appeared and wandered across the stage.

It was the ‘ghost’ of Mulholland, who then explained to the audience who he was and began to share some of his memories of working on the aqua-duct, in the middle of which another man approached the stage seeming quite taken aback, it was the composer, Colin Sprigg, visibly shaken upon ‘stumbling’ into Mulholland (who in actuality has been dead for over 90 years.)

The audience was then treated to the world premiere of, ‘The Blood of the Soil,’ a beautiful, gentle and pensive piece.

The third act of the night consisted of Cerritos Concert Band conducted by Dr. David Betancourt. With the string section replaced by brass and wind instruments the distinction was clear that we were in for a thunderous experience.

The band performed a variety of exciting and fun pieces but the one that stood out the most was, ‘An American Elegy’ by Frank Ticheli.

Betancourt turned to the audience and explained that the piece, “was written to honor the fallen students of Colombine 20 years ago and sadly, it is as relevant as ever today.”

The arrangement included flickers of sound from the throughout the sections that had the effect of voices calling out from different directions.

It was a lively and dynamic show in which multiple styles and periods were explored showcasing the many talents of the music department, students, faculty and alumni alike.

Special mention to choir soloists Julissa Reyes, Teresa Flores, Breanna Estrada, Ariel Salazar and Maya Ohayon who stepped out of the choir and with their velvety voices, drew the audience even further in.