UFCW 324 Engages Customers at Ralphs Grocery on a Possible Strike 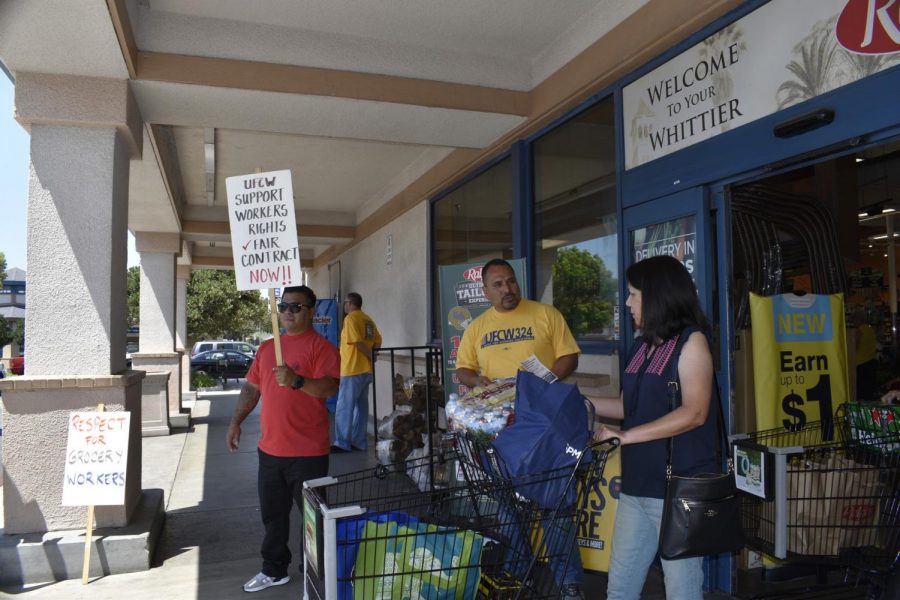 United Food and Commercial Workers Local 324 is reaching out to customers to inform them that grocery store workers at Ralphs Grocery in Southern California have been working without a contract since March and could possibly go on strike.

Negotiations between the union, Ralphs, Albertsons, Vons, and Pavilions concluded on Aug. 25, ending in disagreement over health and welfare benefits, pension, and a five-cent raise.

Union members will vote on Sept. 9 to accept or reject the employers’ final offer.

“The average worker earns between $12 to $13 an hour, and often work two jobs just to make ends meet,” said UFCW representative Jeri Hander, “Our message is one good job should be enough.”

Veronica Rivera, a baker of 12 years at the Ralphs Grocery Store located in Whittier, said, “The union is negotiating in good faith on behalf of thousands of grocery workers in an effort to keep our jobs safe.”

“As the head of my household, I need to work in a safe environment so that I can provide for my family. I need to make a livable wage so that I can make ends meet,” she stated.

On Sunday, Aug. 25, the union and community members engaged with customers outside of Ralphs Grocery Stores in Long Beach and Whittier.

Andrew Roble, a resident of Whittier and member of the Ironworkers’ union, joined the union to talk to customers at Ralphs Grocery Store in Whittier, letting them know the importance of supporting the grocery store workers.

“I was a member of UFCW 324 and came to support my union brothers and sisters in their efforts to make a livable wage,” Roble said.

United Food and Commercial Workers Local 324 has engaged with customers at 136 out of 196 Ralphs Grocery Stores from San Luis Obispo County to San Diego County, with over 130,000 flyers handed out.

The union is asking customers to sign up for advance notice of a strike at Ralphs Grocery Stores by sending the text “NOTICE” to 23396, so that customers can be notified up to six hours prior if there is a strike and to make last minute arrangements to grocery shop.

The union plans to continue to engage customers at every Southern California Ralphs Grocery Store until a contract is negotiated or a strike is announced.