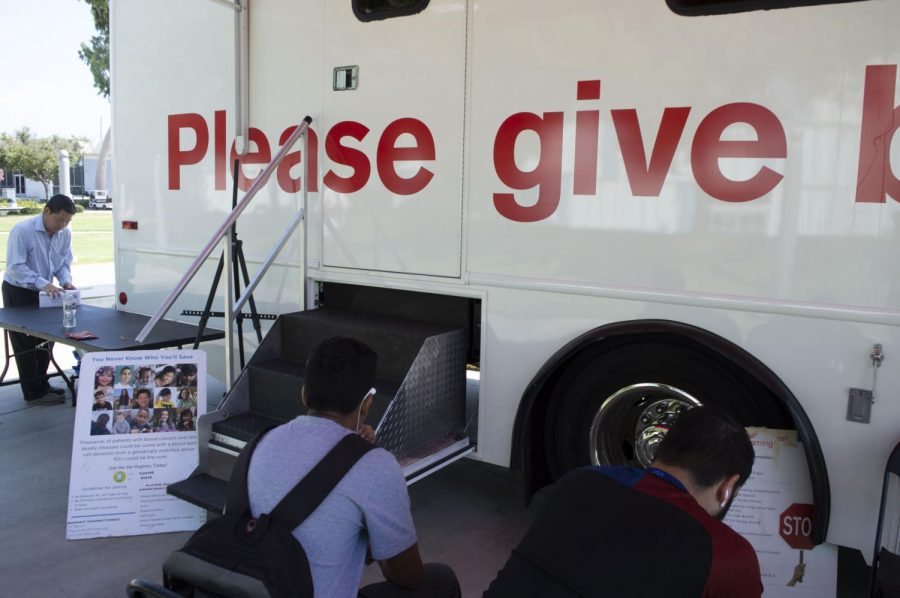 The American Red Cross encourages students at Cerritos College to donate blood and help them reach their goal of 90 donors by the time their bloodmobile leaves campus on Sept. 11.

“We only have six bloodmobiles in Southern California so we schedule them [blood drives] up to 12 weeks out,” James Poole, an account manager at the American Red Cross, said.

He said the mobile operator for the bus isn’t just a regular bus driver, he also must know everything about the bus and the equipment inside the bus worth $600,000.

With the Southern California region only having six bloodmobiles available, a high turnout of students is encouraged.

During the 12-week period the Red Cross has to hire the staff who work the event and gather the materials and equipment needed. Alongside the school, they help create student awareness about the blood drive.

“We do all the hard work by getting the hiring and the organizing [done], the sponsor [Cerritos College] really just makes sure we have an area to put the bloodmobile and is jointly responsible for recruiting,” Poole said.

“When I came there was a 30-minute wait and some people would rather do something else during that time. Saving someone’s life takes time from what you’re doing,” he said, “For me, I have a paper to write but instead I came here.”

Zoila Villata a supervisor charge tech for the American Red Cross said that with the heat, donors really need people to hydrate and drink a lot of water before they come in to reduce lightheadedness.

“California always needs blood,” Villalta said, “Especially during the summer and holiday season when blood supply tends to drop because high school and college students are away.”

“One blood drive can be only for one particular patient, people don’t know the high need of it,” she said, “Even though you see a lot of blood drives, it doesn’t necessarily mean we are saving lots of lives… some patients need from 2 to 100 bags of blood.”

She doesn’t want people with low iron or anemia who want to donate blood to be discouraged from donating.

Villalta says they can take iron supplements with citrus juice like orange, grapefruit and strawberry juice starting for two weeks before donating to help raise their iron count.

Student Johana Cano said she donates blood all the time.

“I push [my friends] to come, I like to bring them with me. When I donated blood they told me mine was for a baby so I just think about the babies being born,” she continued.

The American Red Cross blood drive is located next to the library and will end Sept. 11.