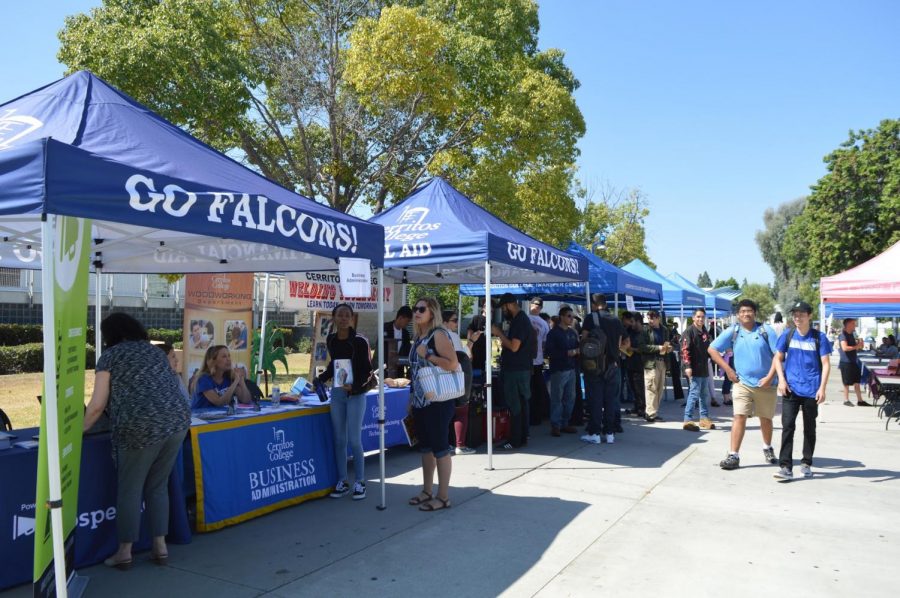 The bunch of booths on display at the fair. Lots of information about the majors the school offers

Many students who fall under this category are attending the Majors Exploration Fair on Sept. 17 had much on their mind and many kept an open mind when looking around the opportunities available to them on campus.

There were hot dogs, an abundance of games going on and a constitution to sign at many of the different booths on display answering any questions about their major and what makes them different from the pack.

In speaking to the welding department about why they are representing out there at the fair, Noah Brandt, a teaching assistant in the department responded.

When asked about why a student might have the interest to pick up this major, Brandt said, “Welding gives you versatility, we’ve had people go on to work on ships, construction or even building parts for fighter jets.

“On to work on ships, construction or even building parts for fighter jets, we want to share the joy of welding with the passerby,” Noah said.

“Our goal is for us to meet you out here, we’re enthralled with your interest in our programs,” continued.

They had quite a few of the students artwork on display out there for students who might be interested have a look at.

According to the Bureau of Labor and Statistics, women only make up two person of the welding workforce, which may explain why they were enthusiastic when a female student approached the booth.

When asked about where sociology can be applied to in a real-world setting the club replied, “Sociology applies to everyday life.”

“It helps explain what’s going on in the world [and] t’s a great major for students to explore all the possibilities we have here, because they get a little bit of everything” they reiterated.

When speaking to the Speech and Communications major booth, after being asked where the degree would be applicable, why the student should pursue said major and what the degree might lead to, Brooke Hannif stated, “Any field you go into, having the ability to communicate is going to separate you from the pack.

“I think if you can tell your employer that you have no problem with communicating you’ll stand out,” Hannif said.

She continued on with, “The possibilities are endless with a communications degree.”

She then gave one example of how a former communications major student one on to work on CSI and was quite the achievement.

One message that was emphasized is students need to realize is that no matter the major they choose, they are not ‘pigeonholed’ just due to what the major is on the deg and that it is only a key that opens the door to whatever it is that they might be interested in pursuing.