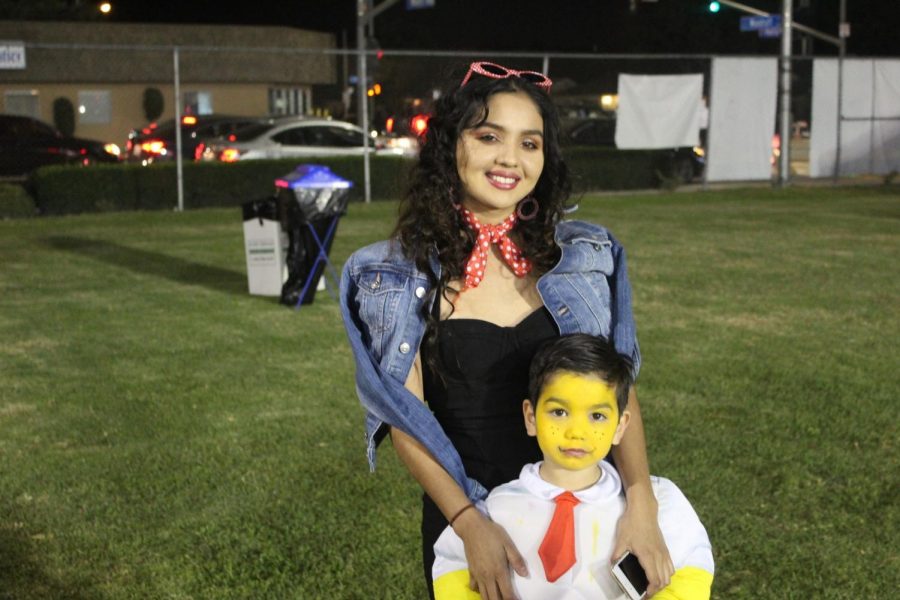 Tania Reyes and her son Sebastian Orrantia attend to the Pumpkin Patch Festival for their second consecutive year. This event was celebrated on Oct 31.

The annual Halloween Pumpkin Patch Festival in Downey was free for all people around the community. The festival contained carnival games for all ages, face painting, costume contests and varieties of food.

The event was hosted at a new location this year–the Downey Adult School.

The Halloween Pumpkin Patch Festival changed its host due to the repairs and innovation ongoing at the Apollo Park in Downey. Mayor Rick Rodriguez was the person that organized the event for the Downey community to connect with the people of the city.

The festival started with a costume contest at 5:30 p.m. for the youngest kids at the age of two and under, followed by the category of three and four years old at 6 p.m.

At 6:45 p.m. the bigger contest with more diversity of costumes was held, with the ages of seven and eight years old competing.

The winner of the first prize was an eight-year-old girl named Brooklyn Rose. Her costume was a Mexican Catrina, with makeup on her face like a skull and a traditional Mexican dress.

Brooklyn explained her inspiration for her costume: “My mom liked the costume. For winning the first prize, I feel very excited and happy, ready for [trick or treating].”

Second place went to a boy dressed up as Thanos.

A Downey citizen named Tania Reyes explained her reasoning for coming to the event: “What inspires me to come to the event was my son because I come every year since I notice of the carnival.”

Reyes was dressed up as a person from the ’60s because she saw pictures on social media that she really liked.

Her son, Sebastian, was dressed up as Sponge Bob.

She explained the reason for the costume was because “he likes Sponge Bob and because [they] were [going to] match.

This was their third consecutive year attending, in which both say they enjoy the games, seeing a lot of costumes and taking pictures with a costume they like.

Sampson expressed the expectations of the Halloween Pumpkin Patch Festival.

“What I expect is to pass a lot of candy, inform some people on fire safety and show off our cool equipment,” he said.

He highlights that if something bad occurs, they will be there to control it.

The “Familia” of the night was the Soberanis. The entire family dressed up as the characters from the movie, Coco.

The family said that they decided to dress up as the characters because their kid loves the movie. The Soberanis’ inspiration to come to the event was to enjoy this moment with their son, walk and enjoy Halloween.

Residents can attend this festival again next Halloween Oct. 31, 2020.