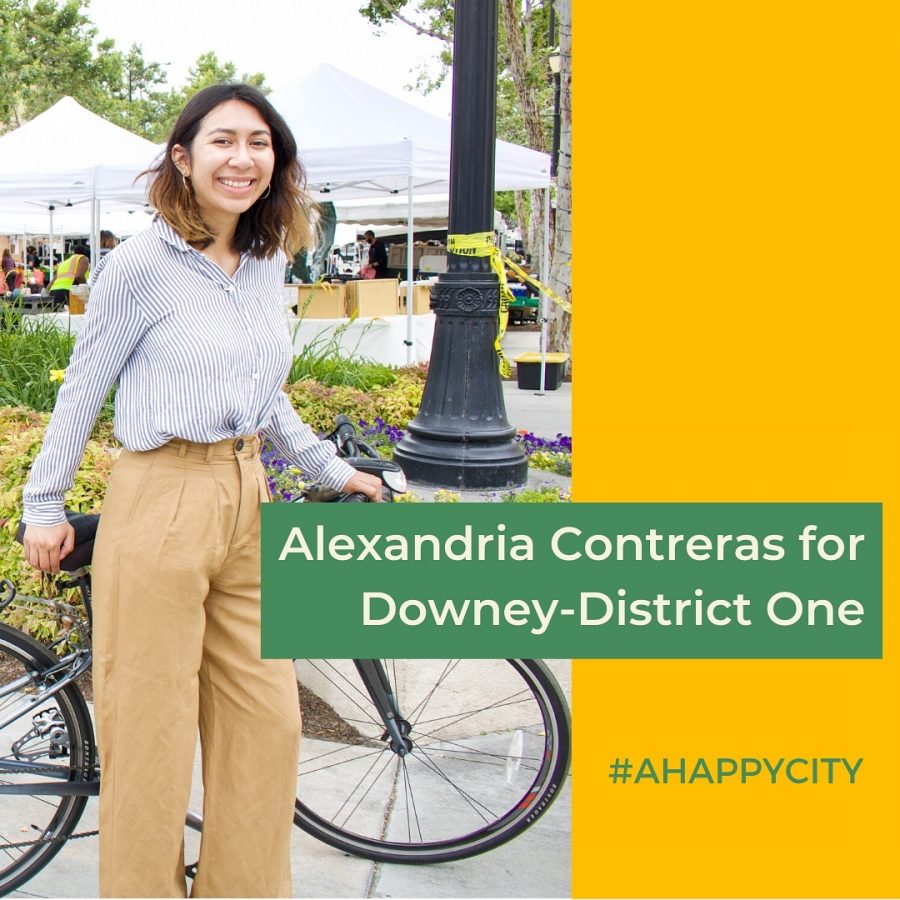 Alexandria's campaign photo. She is the only challenger for district one.

At 26 years of age, Alexandria Contreras is a new to the game of politics candidate whose passion for challenging the status quo is as strong as her advocacy for the working class and minority residents of city of Downey.

“I’m running for Downey City Council District one because I believe the renters are community investors, freeways should never be widened and working class families like mine deserve representation,” tweeted Alexandria Contreras. on Oct. 8.

Alexandria’s political platform Is predicated upon the idea of making the City of Downey a Happy City. Alexandria said, “Making Downey a happy city would mean focusing on community involvement, housing, urban safety, and issues surrounding the environment.

Fearless and unwavering, Alexandria went head to head with Current Mayor Blanca Pacheco, at a candidates forum on Oct. 1. The forum hosted by the Downey Patriot and the Downey Chamber of Commerce was moderated by Dave Lopez via Zoom.

Prior to the event, residents and other participants were asked to submit questions in an effort to get to the heart of why these candidates think they are best to lead the city of Downey.

Contreras condemned the City councils actions in response to the COVID-19 pandemic. “we have one of the highest numbers of COVID-19 cases in the county. We needed to make sure the City was shut down right away. They should have enacted a safe streets program to promote a safe way to exercise. And they should have made a strict mask wearing ordinance,” said Contreras.

Alexandria was also very critical of the city’s Police Department and the amount of funding City council has allocated for it. “I have friends who have been victimized by the Downey Police Department.

We do have funds that could assist renters and homeowners in staying in their homes when they need it most. Instead the City council has allocated $2 million to the Police fund, while cutting funds to community programs.

Cops can’t help if you are having a mental health crisis. The history of the Downey Police Department is a history with issues of racial injustice,” Contreras also stated.

One of her platform points is that Downey needs to be more inclusive and to embrace its diversity. Contreras stated that “the current council allows council meeting attendees to use racial epithets during the meetings and that is simply unacceptable.”

“The city of Downey is very conservative community. The city’s youth population feel as if they are not heard and therefore they do not engage in local government.” Contreras stated. She indicated that if elected she would create more programs for younger students.

“I would take existing programs and make them more meaningful. I think it’s important to get them involved in something they feel passionate about. I would create internships for college students that could help City council.” Contreras stated.

The bike everywhere candidate says her plan once elected would be to work on changing the City’s infrastructure. “I think it would be better for the City and all concerned if people could either walk or bike to work. Cars get so much public space and the amount of time we spend in our cars does not increase our sense of community but rather it detracts from it.” Contreras stated.

“I would also want to change the way we build. Contreras said that the City of Downey is predominately zoned for single family residences. “There is very little zoning for multi-family. The city has not done a very good job at accommodating growth over the past 60 plus years.” said Contreras.

“I would also concentrate on the business community once elected. I think it would be good for the residents if Downey allowed cottage food businesses.

Recently Contreras was interviewed by NBC and vehemently opposed a proposal to expand the 605 freeway. Contreras told NBC that the expansion of the 605 freeway will is state sanctioned violence that will affect working class homeowners rather than the more affluent population. “You can’t replace memories or the generational wealth homeownership provides,” said Contreras.

When she’s not on the campaign trail, she says she’s been reading a lot. “If COVID wasn’t such an issue, I would be hiking or camping. I don’t have any children right now. My time is spent with my family. I’m very close with my parents.

I am a renter whose rent is not as affordable as it should be. The unfortunate truth is that I may never own a home but I am more concerned about my parents. I want to be in position to assist them with home repairs and any other kind of maintenance issues.

Contreras is a graduate of California State University at Long Beach with a Bachelors Degree in political science with an emphasis in the law, public policy and politics. She completed her degree in just three years.

When asked where does the passion and determination to become a public servant stem from? Contreras said, “I grew up here in Downey. I love this City. I attended schools here and graduated from Warren High School. My family lives here.

I want the community to know that they will have someone here fighting for each of them no matter their background, or economic status. All I need is your faith and trust to can make Downey a happy city and we can do it together.” Contreras said.