Veterans Day: honoring the history of sacrifice of veterans 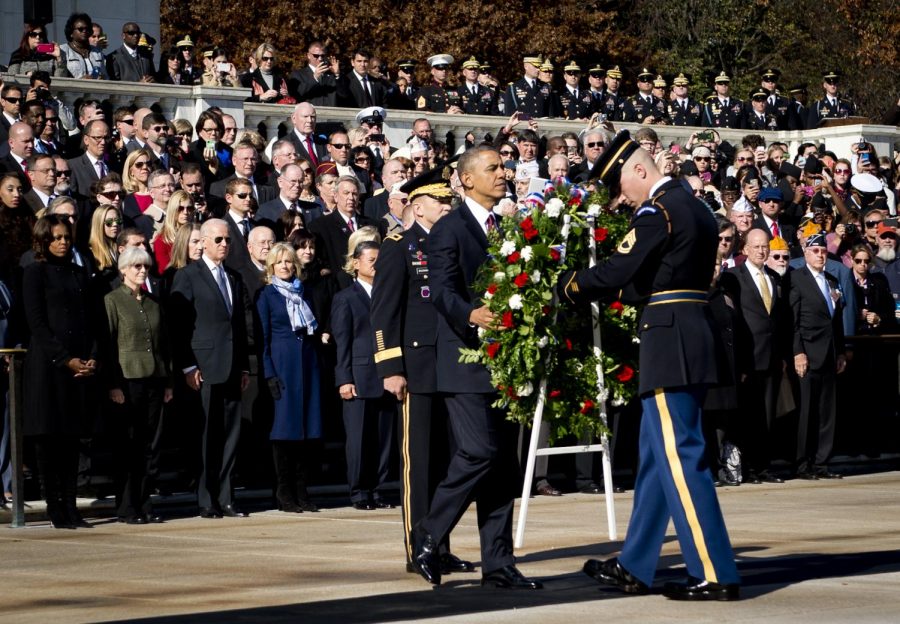 Dong Park, who served nine years in the Army and was a combat medic in Afghanistan for nine months in 2012, originally joined to have a steady job and take advantage of the GI Bill, which helps with educational assistance to service members, veterans and their dependents.

On the other hand, Alexander Rizardo, who served three years in the Army, joined because he wanted to experience military life and knew they would pay for things like housing and school. Rizardo was a fire direction specialist, someone who sends out decoded messages to rocket launchers.

Despite their different reasons for joining, both Park and Rizardo said they are proud to have served their country.

Veterans Day is Nov. 11, a day which honors military veterans who have served in the military in combat, but it was once referred to as Armistice Day, or the day that marked the end of World War I.

That is, although the war officially ended with the signing of the Treaty of Versailles on June 28, 1919, the fighting between the Allied nations and Central powers ceased with an armistice, or temporary cessation of hostilities, on Nov. 11, 1918.

President Woodrow Wilson commemorated the first Armistice Day on Nov. 11, 1919 where the day was meant to be observed with parades and public meetings along with a temporary suspension of business operations at 11 a.m., the hour that the armistice went into effect.

Nevertheless, Armistice Day was not declared a legal holiday in the U.S. until May 13, 1938 and was primarily a day set aside to honor veterans of WWI since it had required the greatest mobilization of soldiers, sailors, marines and airmen in the nation’s history.

In 1954, at the urging of veteran organizations, Armistice Day was renamed to Veterans Day by President Dwight D. Eisenhower to honor all American war veterans.

On the other hand, Rizardo simply said he is glad that there is a day that recognizes the soldiers that served the country.

However, being in the Army also had its dreadful downsides.

Park didn’t like that he saw a lot of his friends die during his enlistment, especially during his time in Afghanistan.

“Some people are still suffering from PTSD and it’s really hard to see. A lot of my friends are dead.”

Meanwhile, Rizardo was discharged from the Army in 2000, right before the Sept. 11, 2001 attacks. If he had still been enlisted at that time of the attacks, he said “If I would have been called, I would have gone [to war].”

Overall, Park and Rizardo both enjoyed their time in the military and meeting people from different cultural backgrounds around the world, but neither would do it again.

“It was a one time thing, something to experience but that’s it,” Rizardo said.

Check out some local events going on below to celebrate Veterans Day this year with modifications due to COVID-19.

Brea will be hosting a virtual ceremony and include a special recognition to honor all local veterans. The ceremony will be airing on Veterans Day at 10 a.m. on BreaTV channels 3 for Spectrum and 99 for AT&T U-verse, online and on Brea’s Youtube channel.

A drive-thru ceremony will be held Wednesday from 9 a.m. to 11:30 a.m. Veterans participating will be recognized, pose for a picture and collect recognition items. Social distancing guidelines will be in place and only one veteran/representative will be allowed to exit the vehicle.

There will be a special ceremony honoring local veterans with a special recognition for La Mirada service members, on Nov. 11 at 11 a.m. at the Civic Center Plaza. Safety measures such as social distancing and wearing of masks will be enforced.

Cerritos will honor veterans with a special tribute video to be broadcasted on Wednesday on CerritosTV3 at 9 a.m., 2 p.m. and 6:30 p.m., on the city’s website, Facebook and Youtube. The video will also feature a message from the mayor.