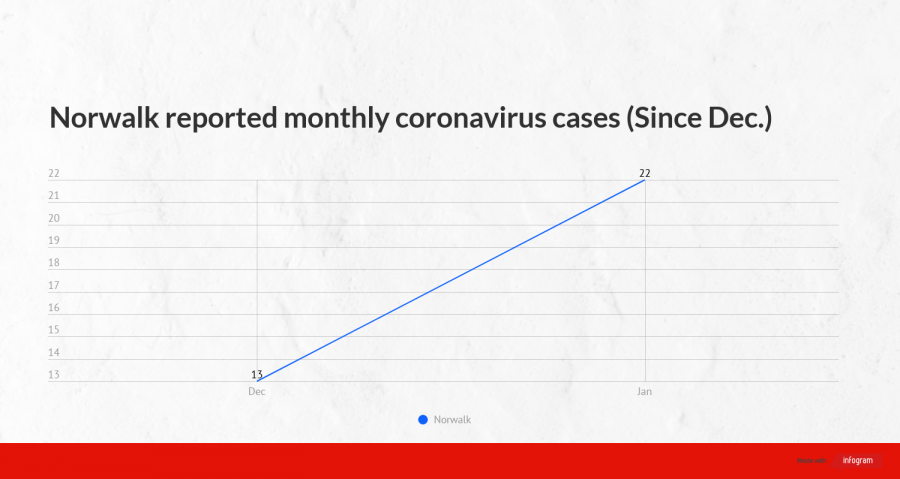 Following the increase in COVID cases, Norwalk city hall will be open Tuesdays and Thursdays by appointment only.

The city’s monthly cases have nearly doubled since December when they reported 13 cases. In January, 22 cases were reported. The first case in February was reported on Feb. 4 in the Department of Transit.

“The increase in positive cases that employees are experiencing coincides directly with the rise in cases in our surrounding region. From our contract tracing, we have confirmed that all of the positive cases that we have experienced were attributed to exposure from sources outside of the workplace,” Wosick said. “It is also worth noting that since the decrease in cases began in our region in mid-January, we have also seen a significant decrease among employee cases.”

Norwalk Social services and the Department of Transit interact the most with the public. Social Services delivers food to seniors during the week, and Transit transports people across the city.

Social Services has reported seven positive cases. Transit has reported 13 cases, the most in any department.

Department cases include: Four in Community Development, five in Public Service, four in Public Safety and three in Recreation.

“The City follows all public health guidance regarding notifications of positive cases. This includes public visitors to City facilities who meet exposure or close contact criteria,” the Lieutenant said. “Additionally, all facilities, workstations, equipment, etc. are also sanitized on a regular basis, and following any positive case impacts to ensure public and employee safety.”

“This included limiting in-person, public appointments to two days a week and limiting the number of employees in the workplace to the greatest extent possible. These measures took effect Jan. 18 and will remain in effect through Mar. 31,” Wosick recapped.

Norwalk city officials say they have prioritized the health and safety of their employees. Still, they have not made the COVID-19 vaccine mandatory for staff to take once it becomes available to them.

Wosick clarified, “According to the most recent LA County Public Health vaccination distribution schedule, government employees are included in Phase 1C. The County estimates that vaccines will begin to be available for individuals in Phase 1C sometime in March.”

Councilwoman Margarita Rios feels that the city needs to find a balance between employee health and providing service to the community.

“The employee’s health is a number one priority, but if the COVID-19 positive cases are coming from employees who are not at city hall or are working from home, what’s the rationale for closing city hall?” Rios questioned. “At some point, the city needs to get back to the work that needs to be done. It’s hard to do that when you are only open Tuesdays and Thursdays.”

Norwalk is working with LA County Public Health to support vaccine distribution in the city.