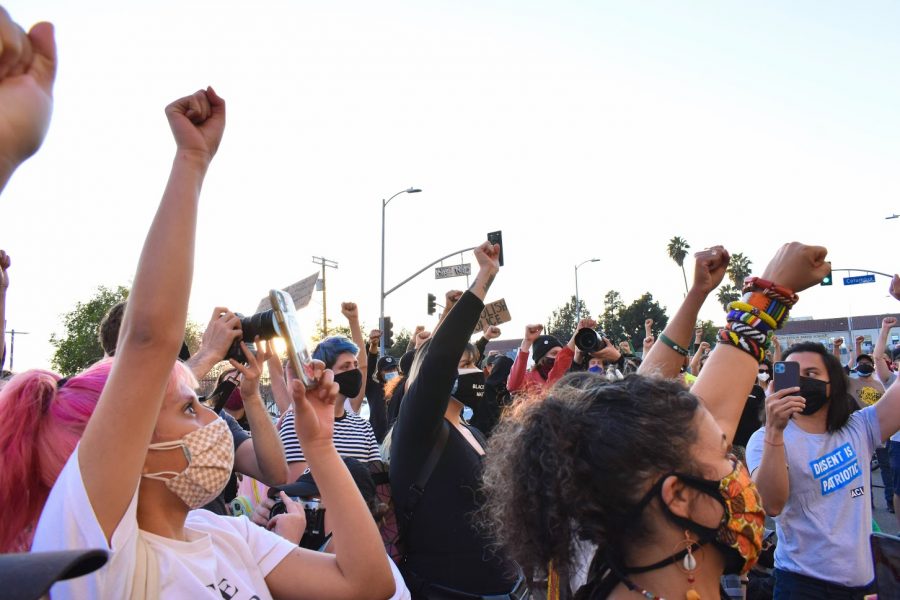 BLM speakers asked their rally participants to raise their fists as they called for the defunding of police during a rally on Feb. 24, 2021.

Black Lives Matter Los Angeles held a rally across the street from the LA Police Protective League (PPL) to fight for police defunding on Feb. 25.

Families and friends of police brutality victims spoke to tell their story and show why they think the police receive unnecessary funding from the City of Los Angeles.

Maria Hernandez shared that her brother, Daniel Hernandez, was murdered by LAPD officer Toni McBride. McBride shot Daniel six times after he pulled over from a car accident.

“We organized this rally and press conference to call for an end to police associations,” said BLM organizer Tabitha Jones Jolivet. “When you see the ways that LAPD is vested in a system of violence and criminalization that is inherently anti-black and covered by the protection of the PPL, we believe that power needs to come to an end. When we lift up the demands of funding services, not the police, this is one way we are lifting that forward.”

BLM LA has repeatedly called for abolishing the LAPD and for the 54% of the police budget to be reallocated to Black and lower-income communities. They believe that funding in community services would keep people safe and lower the crime rate.

“When we say ‘Defund the police and reimagine public safety,” we are lifting up a vision of public safety that is rooted in creating conditions that help people flourish,” said Jolivet.

“It was important to come out to support equal justice and equal rights and to hopefully end police brutality,” said Hughes. “The police don’t need all that funding. We should be giving it to people and services that need it, education especially. In my younger days, I was physically abused by the police, even when in custody.”

Hughes and his niece also participated in the BLM protest in front of Mayor Eric Garcetti’s house. The protest was broken-up after the police intervened.

“What they did that day wasn’t right,” said McFadden. “I realize that I shouldn’t be afraid anymore because I have people protecting me here.”

Melina Abdullah, the co-founder of Black Lives Matter LA, participated in the event and encouraged others to stand with their organization.

“People are ready to fight back,” said Abdullah. “We are always aware that the police may intervene with these events. Next time we need more people out here. The more people there are, the more protected we are.”

“We are across the street from the PPL and in front of the ACLU so that we are on the side of justice. That is the side of oppression.”

“The more we came, the more connections we made. It helped BLM advocate for, not just for the defunding of police but for the defunding of police in our schools. People aren’t aware that police on our campuses target black students,” said Alia Fields. “It feels right to continue to work to help a larger amount of people than those in our schools.”