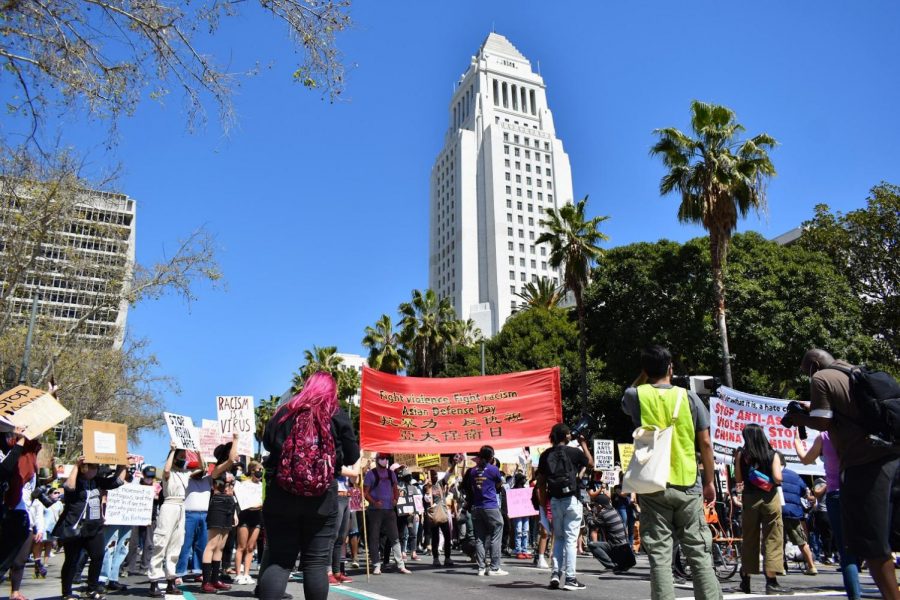 Hundreds marched against Asian-hate in Los Angeles on March 27, 2021. The march began at LA city hall.

Hundreds of supporters protested on the steps of Los Angeles City Hall against Anti-Asian violence on March 27. After several speeches, they marched through the streets to the Chinese-American Museum to spread their calls for unity against Asian-targeted attacks.

The ANSWER Coalition and the Party for Socialism and Liberation organized the event to combat recent hate crimes against Asians and people of color. Black Lives Matter supporters came to stand in solidarity with the Asian community.

Sheila Xiao is an organizer with the ANSWER Coalition. She helped organize the demonstration after seeing the rise in Anti-Asian violence.

“We knew that these crimes had to do with the demonization of China from politicians and the media. Racism is usually the precursor for war, and we’ve seen that throughout history,” said Xiao.

Jackie Fernandez gave a speech on the city hall steps and addressed the Asian-targeted shooting in Atlanta, GA, the week prior.

“A white man who can’t stand Asian women grabs a gun, kills them and the headline the next day is ‘Young man has a bad day,’” Fernandez said to the crowd of protesters.

“Asian women have been told that we should be flattered by fetishization or objectification. Well, we are not flattered! This narrative has been placed on us, and it has given white men this entitlement to our bodies, and we see it in response to this massacre.”

Protesters cheered as she denounced misogynism and Asian stereotypes. They raised their signs with messages such as “Asian Lives Matter,” “Stop APPI Hate” and “Love is a Vaccine.”

At 1:30 p.m., the crowd took to the streets to peacefully march against Asian hate. Xiao led the march down East First Street, where bystanders cheered for demonstrators and drivers stopped to honk their horns in support.

Juliane Esquirez and her daughter were dining at an outdoor restaurant as the march walked down the street.

“I’m glad people are doing this. Those attacks are terrible. The attack in Atlanta was Asian targeted, and it’s important to educate our youth on the issues of racism,” the mother said as she held her daughter’s hand.

While many bystanders cheered and applauded in support of the march, James J. Brown III dismissed the Asian-hate crimes.

“They let the media pump them up to 200 strong, which isn’t a great turnout,” Brown stated.

As Brown made his statement, six other peaceful demonstrations occurred throughout LA County and Long Beach to combat Asian-hate. Community members stood in solidarity with the eight families who lost a loved one during the Atlanta massacre.

Catarina Moore, with the PSL, passed out newspapers addressing racism in the U.S. government.

“We want to bring attention to this propaganda the U.S. has been waging against China, while at home they murder Black people with impunity,” Moore said. “United, we are stronger than them.”

“If any more protests come up, I would definitely attend those,” Karns said. “A friend of mine and I are making another ‘Skate to End Hate’ protest in LA. We are just working out when and the route.”