La Jara Brewing Company, the small business built on locally crafted beer, is hoping to open by the Summer 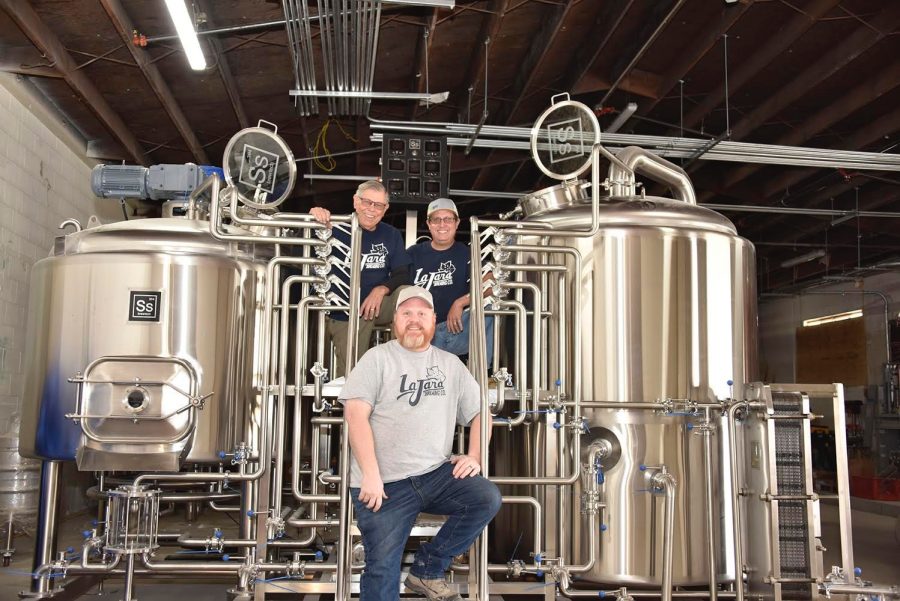 The tanks are rolling in on Norwalk’s South-Eastern leg and these local brewers couldn’t be happier. Derek Johnstone, his business partner Jason Sullivan and Derek’s father, Randy, are the entrepreneurs behind La Jara Brewing Co., a backyard hobby turned business venture that hopes to bring locally crafted brews to a community thirsty for new businesses.

“We do not have a hard date for opening as there are several things in motion that are out of our control, but we are tracking for a summer opening,” said Derek, who has been brewing beer at home for 10 years and acts as co-owner and one half of the company’s master brewing team. Before having their own building, the partners had to use home equipment or ask other breweries to use their fermenters for bigger production.

The new tasting room and brewery is being constructed at what used to be a tile and granite warehouse located right off the Carmenita exit on the 5 freeway. The partners walked through their building with plans and posted renderings for where everything would be. The main entrance is a commercial roll-up door that lifts to reveal a full bar and lounge area, the wall where taps will pour cold beer straight out of the freezer, glass panes that allow visitors to view the brewing process while they eat and drink and a designated manufacturing floor leading to another opening for shipping.

“Our brewhouse can produce 10 BBL at a time and we have five fermenters that allow us to ferment 1550 gallons of beer at any one time,” Derek said. The brewing room needed to have the concrete completely repaved to support the fermenters at their full weight. The large steel tanks serve as the new home for his award winning beers, a major upgrade from the tall pots they used initially.

The partners brought their designs and plans to Norwalk City Hall and in October of 2019, they celebrated the approval of a permit allowing them to construct a tasting room at their brewery. “This is a huge milestone and allows us to proceed with our project as we have been envisioning: Locally inspired beers brewed with regionally sourced ingredients served as fresh as can be.” writes a caption under a picture of the three of them on social media.

Celebratory toasts and clinking glasses would soon become another pastime enjoyed in a pre-pandemic world. Weddings were cancelled, parties, sporting events, funerals and any other planned gathering that could facilitate the spread of this deadly virus had to be postponed indefinitely. La Jara Brewing wasn’t ready to open yet, but permit requests stagnated, plans stifled and development was slowed to a crawl.

“I think with COVID, there was a slow down at first but that was pretty much global,” said Sullivan, “there were delays getting permits approved because the government started furloughing. There was maybe a month or two where we weren’t sure what could happen but (the city) figured it out quickly.”

Since then, the partners have been hard at work remodeling their building for brew production which, for them, meant full renovations top to bottom. Along with repaving the floor, they had to rewire the electrical grid, replace the old plumbing and of course, build the brewery inside.

“We are oversized on purpose so we have room to grow,” said Sullivan on possibly expanding to a barrel aging process. They even capitalized on some leftover granite from the previous owners, adding it to their table and bar designs. Accommodations for social distancing and an estimated seating capacity is unclear, as the owners await new directions from the county as the Summer approaches.

La Jara Brewing Co. said 13423 Excelsior Drive was an optimal location for their business, offering not only freeway access, but little to no competition in the area.

“We looked at everything. It really comes down to a community that doesn’t have a brewery and is excited for one,” he said, noting that Norwalk residents may have the tendency to commute to neighboring cities to spend their money. “That’s all revenue that Norwalk could be utilizing and all revenue that could be staying within the community.”

Norwalk faces tough competition in attracting businesses despite its proximity to some of California’s busiest highways. Major commercial areas in Downey and Cerritos continue to develop and add new businesses, a model that Norwalk planning officials have long been trying to replicate with some success in recent openings.

“We were so lucky to know somebody that had this building available. The chips just fell in the right place,” said co-owner Randy Johnstone, who says that his son’s hobby has expanded his pallet for lager, “Now that I know more about tastes and the process, I can’t drink the beer that I used to.”

La Jara Brewing Co. posts construction updates on their Instagram page, and recently announced that they are testing the equipment to begin brewing soon. Commenters and residents alike share their excitement for the grand opening, with dozens asking when they could finally stop by and enjoy a cold one.