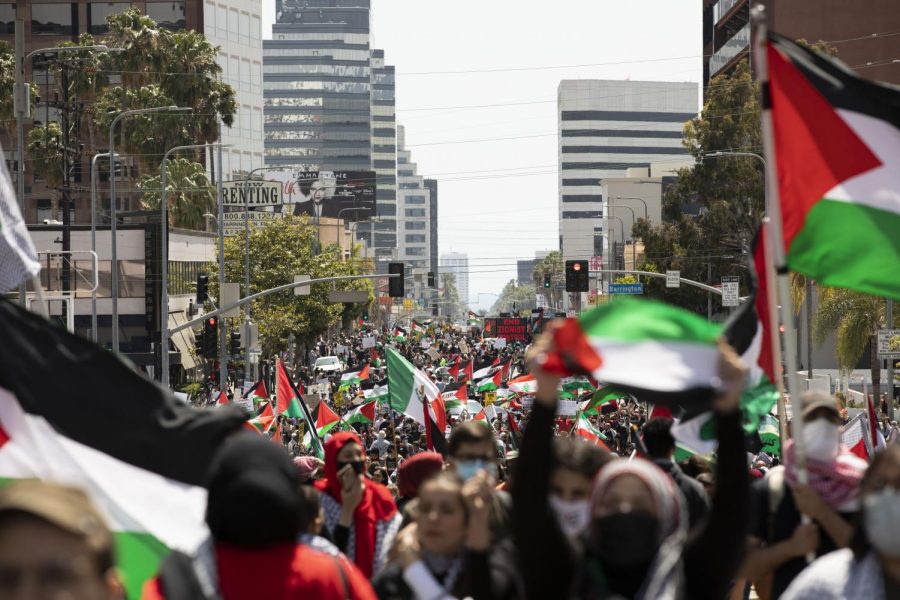 Thousands marched on May 15, 2021 in Los Angeles in solidarity with Palestinians. Demonstrators marched on Wilshire Blvd demanding peace and justice.

“Free, free Palestine!,” demonstrators chanted as the thousands funneled through the 405 freeway underpass at Wilshire Boulevard and continued towards Bundy Drive before turning around and heading back towards the Wilshire Federal Building.

Thousands marched in solidarity with Palestinians in Los Angeles on May 15, after the increasingly violent conflict between Israel and Palestine has continued to shock the world.

The “Los Angeles: Nakba 73 – Resistance Until Liberation Rally & Protest” remained peaceful but passionate as many chanted and vocalized their anger over the violence and oppression happening towards Palestinians in Jerusalem.

The protest began at noon in front of the Wilshire Federal Building, 11000 Wilshire Boulevard, and as the mostly masked group marched west, men, women and children from all walks of life joined in support.

Before the crowd began their trek down the street, however, tensions were high when Palestinian supporters confronted a group of people who arrived waving an Israeli flag.

The incident began when Gita El Harrak, a Palestine supporter from Morocco, began shouting at Rabbi Daniel Bouskila and his group for being at the protest with the flag.

The situation further escalated when Bouskila responded to some of El Harrak’s arguments by trying to explain he was also from Morocco.

The argument between the two highlights the complicated history of Israel’s conflict with Palestinians.

El Harrak explained she was at the march because, “[she wants] peace, harmony, equality and justice.”

El Harrak then turned to Bouskila and continued to argue asking, “Do you think it’s okay to murder innocent people? Why are you here?”

Bouskila is the Rabbi at the Westwood Village Synagogue; just a short ten-minute walk from where the rally was held. The Rabbi said he, his wife and the rest of his congregation had just finished Shabbat morning services and decided to walk over to see what was happening.

“It’s my country too,” Bouskila responded, further explaining that his last name is Moroccan.

“We felt that America is this beautiful democracy and my wife, Peni, and I were here on this same corner where everybody is standing now, but it was all Israeli flags,” Bouskila added. “Had there been Palestinian flags then, nobody would have said the types of things that are being said to us, like ‘pig’ and spitting our way.”

The Westwood Rabbi said he believes, “people should be able to engage in dialogue, even in protests and counter-protests, without anger and insults.”

He also went on to explain his 21-year-old son, Ilan Bouskila, currently lives in Israel and is concerned for his safety.

“The beautiful thing my son said to me this week was that one of the great blessings of living in Israel as a Jew is getting to know Arabs and the Palestinians, their culture, their language,” Bouskila said.

“If Israel was able to make peace [with Egypt] in 1969, I believe there can be peace. There can be an arrangement. Whether it’s two states, whatever they decide works best for them. I will never stop hoping for peace in Israel,” he said.

This sentiment and hope for peace was not well received by protesters advocating for Palestine, and a larger crowd then broke out trying to force Bouskila and his group to leave the protest.

Several volunteer safety marshals were the first to respond to the incident.

Aaron Warner, 30, was one of the volunteers that were there for safety traffic conduction and conflict de-escalations when necessary.

“I would say there are at least three dozen of us, from a collection of different community organizations, that share marshal and de-escalation training,” Warner explained.

“The group of the marshals stays in one collective body that observes social distancing as necessary and stays together so people here don’t get separated or targeted by counter-protestors.”

Eventually, Los Angeles Police Officers intervened to deescalate the altercation between the two groups and gradually moved the Rabbi’s group across the street at the intersection of Wilshire Boulevard and Gayley Avenue.

“We are out here to maintain some order of peace and to ensure that no citizens get injured while they get to exercise their First Amendment privilege,” said Senior Lead Officer Jim Lavenson. “We don’t want people getting hurt and we don’t want things escalating. That’s why we’re here.”

Bouskila’s group remained across the street from protestors and there were no further confrontations between the groups.

Bouskila and his group were not the only Jews in attendance at the rally. Hundreds of Jewish people also attended the rally; however, they were there in support of Palestinians.

Hannah Baker, a Jewish Los Angeles resident, was at the protest because she believes it is important to demonstrate that Judaism is not Zionism.

“[Biden] does not speak for everyone,” she said.

The LAPD’s goal for peace at the demonstration was successful as the rest of the rally proceeded without violence from either protestors or law enforcement.

The first week of the devastating Israel-Gaza crisis left more than 200 people dead, the majority of which were Palestinians.