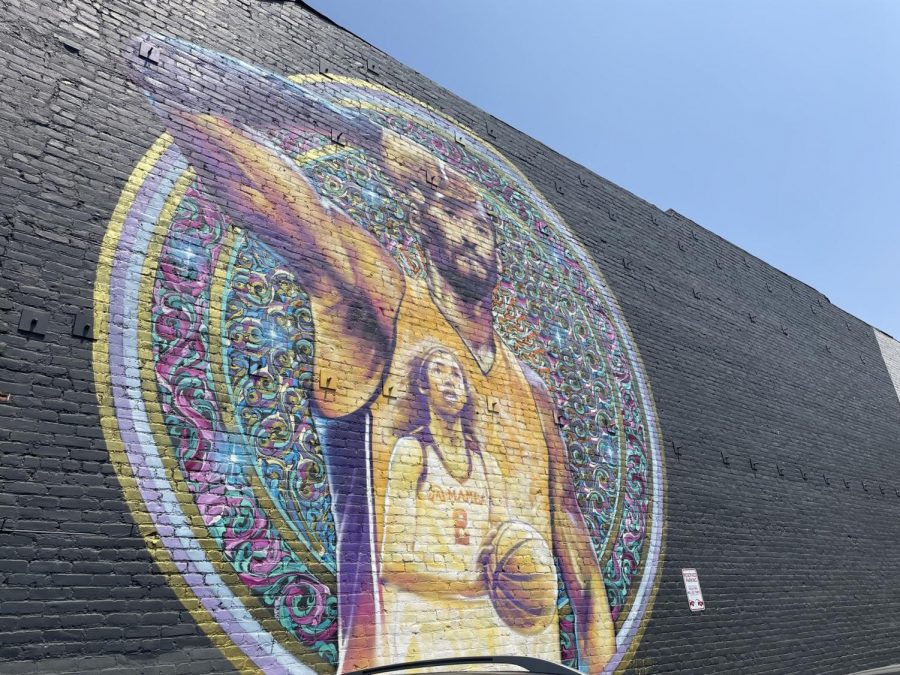 The Los Angeles community celebrated Kobe Bryant on August 24, in honor of the basketball star’s numbers with the LA Lakers (8 and 24).

Bryant’s birthday was celebrated the day before on August 23.

Bryant, his daughter Gianna and seven other people died in a helicopter crash on Jan. 26, 2020.

320 murals were created across all of Southern California. An estimate brought by Kobe Mural.com, an official interactive map where visitors can access informative to visit public artworks dedicated to the Olympic basketball player and his 13-year old daughter.

Anthony Nash, a vintage car mechanic, was visiting one of the Bryant murals at 1005 W Century Blvd. He wore a Kobe Bryant rest in peace shirt, a decorative face mask with images of Kobe and Gigi, as well as a LA Lakers hat in honor of him.

Outside the mural was his truck with the number eight, in reference to Mamba.

“He encouraged me to reach a dream I never thought I could reach,” explained Nash. “The best I can be at whatever I do.”

The mamba mentality, as Nash described, encouraged him to give his best efforts at his personal goals.

One of his projects was honoring Kobe Bryant with their own personalized 1972 Buick Skylark. Nash hopes his passion for cars can encourage others by spreading awareness with each mural he plans on visiting.

Bryant died one day after Nash’s birthday on January 25.

Nash said he was in disbelief after hearing the news that Gianna died with her father.

“I thought I was dreaming,” he said. “I’m a grown man, but I cried like a baby for him, and Gigi and everyone else that was on that plane.”

“It changed the world. You know, it made a lot of people come together in love,” Nash explained the passing of Kobe strengthened his love for his own daughter, “it made a lot of dads hug their daughters.”

Nash said that Los Angeles can continue to honor Bryant by establishing more youth programs in the city and teach the Mamba mentality.

“Do the best in everything you do, that way you can never go wrong with that outcome,” Nash said.

At the Staples Center, home of the Los Angeles Lakers and where Kobe Bryant spent his 20-year career, visitors from around the world came to pay their respects.

“I can’t even capture this,” Jackson said.

“Real motivating, inspiring. I’m really just here to capture this moment,” Jackson said as he documented his arrival at the Staples Center.

His distinctive yellow and purple sports uniform was a common color worn by supporters who came to pay their respects.

Jackson mentioned he was devastated when the news came out.

“I was a Lakers fan 8 to 24,” Jackson said as he explained his lifelong support during Kobe Bryant’s career and the impact he felt from his death.

“Very emotional to see he died and the way he died. It’s like, there’s no coming back,” he said.

Jackson suggested Los Angeles could change the name of the Staples Center to, “The Kobe Bryant Center.”

Jackson pointed towards the center of the Staples Center to have a giant statue and emphasized fans would appreciate seeing a visible memorial piece.

“There in the front of the door. I mean, I’m pretty sure Lakers fans would appreciate that for real, I know I would for sure,” Jackson said.

Outside the center, famous athletes like Jerry West, Oscar De La Hoya, and Kareem Abdul-Jabbar have their own commemorative statues.

Bryant’s message of uplifting the youth was always an example of why loyal fans admired his accomplishments.