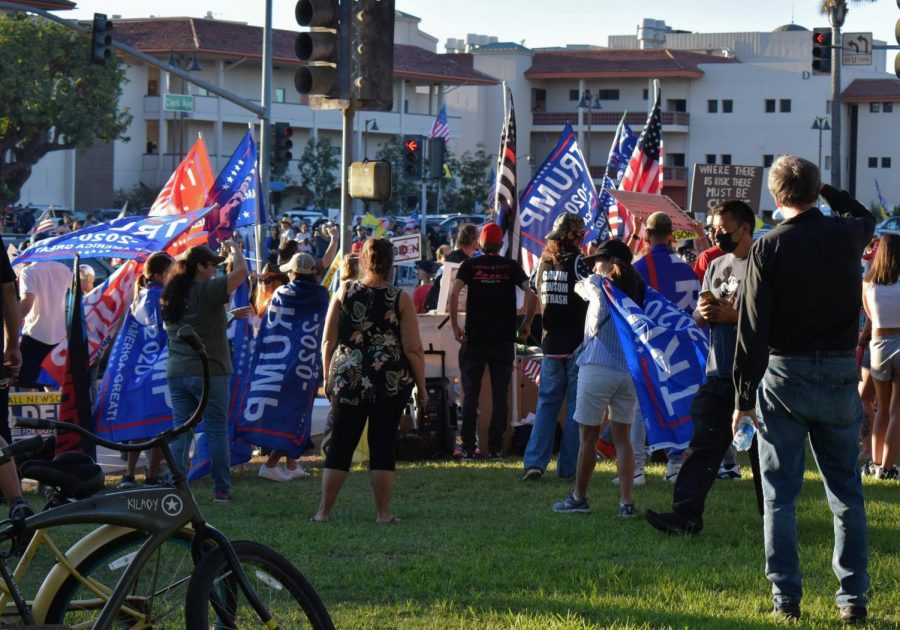 Trump supporters protest across the street from Long Beach City College. Many claim the election was stolen by Joe Biden, who rallies with Governor Newsom at the college on Sept. 13, 2021.

During the rally Trump supporters, recall candidates, proud boys, anti-maskers and anti-vaxxers protested outside claiming the election is rigged before it begins.

President Biden is the most prominent Democrat to support Newsom, as Vice President Kamala Harris and Massachusetts Senator Elizabeth Warren came to support the governor earlier in the campaign.

“The eyes of the nation are on California,” said Biden as he spoke to the invite-only rally audience. “The decision you are about to make is going to reverberate around the nation.”

The president continued to discuss recall candidate front-runner Larry Elder, also referring to him as “the closest thing to a Trump clone as I’ve seen in this state.”

“Voting ‘no’ will be protecting California from Trump-Republicans who are trying to block us from beating this pandemic,” said Biden.

“We don’t need politics in this battle against COVID-19. We need science, we need courage, we need leadership. We need Gavin Newsom,” said the president.

Outside the college, far-right protesters and anti-science activists chanted to remove the governor and shouted disputed information about wearing a mask and the COVID-19 vaccine.

She made it clear that Republicans’ believe that the election is rigged for Newsom, despite the election being the next day.

Elder also said that he detected voter fraud before the election.

Republicans continue to repeat the pattern of claiming an election is rigged when they lose or see the polls are overwhelmingly against them.

“I probably have 50 – 100 text messages that have come in today from my phone, of people saying they went to go vote and as soon as they got there with their ballot, they said it was already registered in the computer and that they had already voted,” said Stevens. “I have another guy we met at a rally yesterday, who says that he has friends in Mexico and they were getting ballots in Mexico.”

Stevens acknowledged that no election officials have come forward to give credit to her claim.

While the Republican candidate believes that the election was rigged if Newsom won, her attitude changed when considering the scenario of Elder or herself winning the election.

“It’s really hard to know. The only way we are going to know who the winner is, is with a full-blow audit of the state,” said Stevens, taking time to choose her words carefully. “If I win that would be amazing, but I would still want to check to make sure it’s legit.”

Stevens says she would want an audit to ensure election integrity, but she again changed her attitude when considering an audit if Newsom wins.

The Republican candidate says she and her supporters would order an audit of the election results, but Stevens is confident the audit will show fraud.

“There is no way [the audit] is going to come back clean,” she said. “We already have story after story right now. They’re even using Dominion voting machines.”

The claim that Dominion voting machines are sources of fraud is said by My Pillow Guy, Mike Lindell. His claim was proven disproven, and now Lindell and other news outlets who spread the claim are being sued for billions of dollars.

After numerous polls showed Newsom in the lead, his victory was confirmed during the evening of Sept. 14. Republicans plan to fight the election results despite no credible evidence of election rigging.