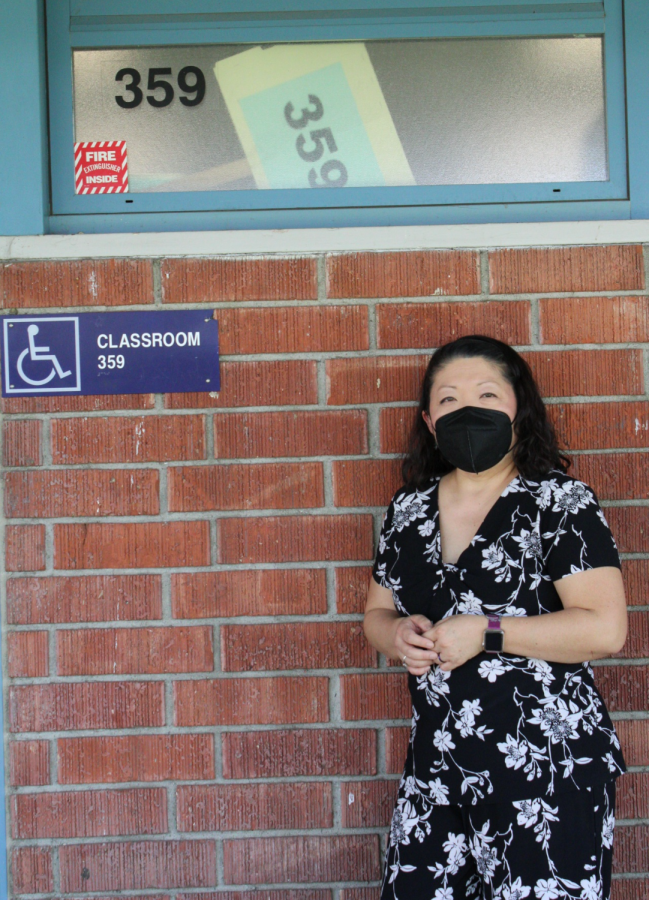 Un-Soo Wong is a journalism teacher at Norwalk High School who has been teaching for 17 years.

Norwalk High School’s language arts Instructor Un-Soo Wong had just returned to teaching after being sick the day when the school announced that in-person classes would switch to a more online environment.

Wong had attended Biola University as a full-time student initially to become involved in counseling and ministry work to make a living in a church setting.

Wong was convinced by her father to pursue a teaching credential, which meant she had to go after two Master’s degrees at once.

Known not only for her love of purple but also for being one of the most organized and shrewd, it isn’t hard to see why students would turn to Wong.

One instance of Wong’s students turning to her for advice was when a high school Freshman was anxious about COVID-19. Mrs. Wong remembered that student asking her, “Ms. Wong, what does this mean? Will we come back?”

Mrs. Wong replied, “Oh, I’m sure we’ll be fine. You know, we will probably be gone [for] a couple of weeks.” Wong mentions that the days’ general mood usually depended on the student’s enthusiasm and success, it was less so during quarantine.

When she has free time, Wong does kick-boxing to let out her emotions, encouraging students to find healthy habits.

Comparing the look on journalism students’ faces at the sight of a printed newspaper to the sadness that was felt when a present-day student lost a relative, Wong expressed the feeling that this shift in the classroom dynamic was noticeably different.

Coming back wasn’t as healing as one might think, as Wong said it was also difficult to tell who was who, given that most students would not turn on their cameras during online learning.

“We were all scrambling just to do the best we can but the hardest part was there were no expectations set by the district or the administration,” said Wong.

“I thought distanced learning last year was the hardest year of my career,” Wong said, “This is the first year I contemplated retirement.”

But it was the students’ personal growth that Wong said inspired them to continue teaching—despite the negative impact on mental health.

One such student is Wong’s student editor-in-chief, Casandra Varela, a 16-year-old junior who has been with Wong for most of the quarantine as a journalism student.

Not every aspect of quarantine was negative, found Varela.

“Personally, I did enjoy the comforts of being at home since I am more of a homebody, but I learned better in a school environment,” she said.

However, she confessed that she also suffered the same mental toll as Wong from being separated from classmates and plowing through an unending mountain of Associated Press based homework.

“In a journalism aspect, AP Stylebook [assignments] and even to this day, they’re the most difficult and it’s not because they’re hard … they’re [just] tiring,” said Varela.

Varela reflected that it was not only the perfectionist in them that allowed them to complete everything but also Wong’s performance.

“She was one of [the] few teachers who made online learning enjoyable,” the editor-and-chief said, I did look forward to checking notes.”

But Varela feels that learning journalism is easier in a classroom setting because the workload remains the same and it is easier to communicate with classmates and work to the best effect.

“Getting to know my reporters [is] just so much easier to do all of these things,” said Valera.

One student who is familiar with Wong’s class before the pandemic is Daniel Prado, a Psychology major at Cerritos College who specifically attended Wong’s AP English Language class.

“What I liked a lot about Mrs. Wong’s AP class was the feedback she gave us whenever we turned in our assignments and essays,” Prado said, “She was really great at focusing on key parts that could be improved on and effectively listed how our writings could be better.”

Holding a physical paper marked up with purple ink is more hard-hitting than whatever is on the screen.

Prado said, “I am not sure if I would have liked her class as much as I did in-person because interacting with her face-to-face and having her check our work from time to time really made me want to be a better writer.”

Even though the pandemic was tough on not only Mrs. Wong but for her students, it looks like things are slowly going back to normal and hopefully, life will be better than it was two years prior.