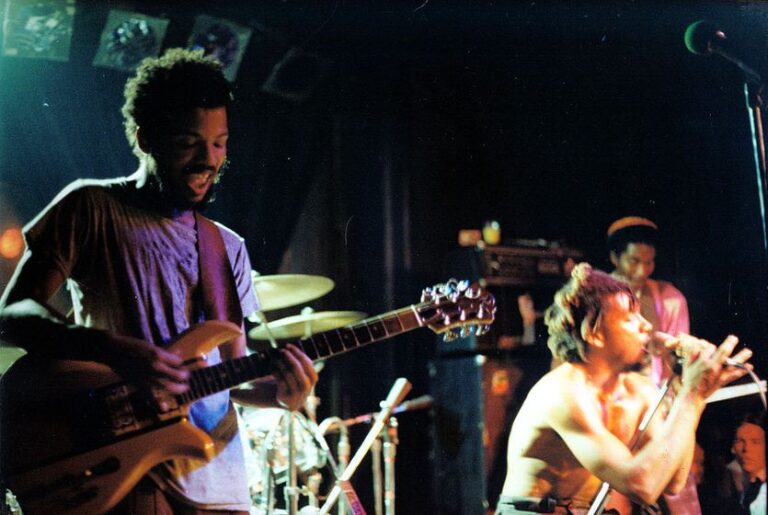 Bad Brains has been a major influencer in the world of punk. Rebecca Aguila and Vincent Medina discuss their incredible history. Photo credit: Far Out Magazine

REBECCA: Hi everybody! My name is Rebecca Aguila and I’m the multimedia editor for Talon Marks, and today we have our staff writer-

REBECCA: -and today we are going to be doing a discography for “Bad Brains”, which is the first blacked belled punk band to be banned in D.C. from playing. So Vincent, I know I had assigned this to you on Camayak, have you ever listened to punk music before? Are you familiar with it?

VINCENT: I’ve never listened to punk music before, so it was really cool to be introduced to this genre.

VINCENT: I think it sounds good, but punk music has never really been my thing. I’ve always swayed towards different genres of music. I haven’t purposely swayed away from it but I’ve never really been attracted to it, I guess.

REBECCA: Okay. Well I’m glad I could help you with “Bad Brains”. This is one of my top favorite bands. I probably listen to one of their albums at least once a week, even though I’ve listened to it many times. Their music and the genre that they induce in their sound, it’s totally amazing. It’s out there but it’s different from the typical punk music that you’d normally hear from the “Ramones” and “Black Flag” and all those regular types of punk bands. What song did you really… What song do you most enjoy listening to by “Bad Brains?”

VINCENT: I enjoyed their song “Sailin’ On.” The first song on their first debut studio album. I thought it was really good. It was really fast-paced. I’m not used to fast-paced music, but the story behind it was pretty cool. That it’s about a bad breakup or whatever, the band used the metaphor “sailin’ on,” instead of the term “moving on,” as in moving on from the relationship.

REBECCA: Hmm. Nice, interesting. So I know you’re not really into fast-paced music, did you get to listen to any of their reggae songs from any of their albums?

VINCENT: I’m sorry I didn’t get that. What was that?

REBECCA: Did you get to listen to any of their reggae songs?

REBECCA: Okay so, “Bad Brains” is like, I don’t even know how to explain it. You know how I was saying they have a mixture of sounds? Like punk and hardcore and reggae? So in a lot of their albums, they incorporate a lot of like two or three songs of punk, two or three songs of like a hard-core fast deep-beat type of stuff, and then they have reggae which is a lot of their fan favorites actually. So one of my favorites that is one of their reggae music is one of their songs, let me see, it’s a song called “Overs the Water” from their “God of Love” album released in 1995. It’s super slow-paced. You would never suspect a reggae band to be able to produce fast beat songs, like another song that I like is the classic “Big Take Over” from their 1982 album if compare that from their sounds you would not believe how a reggae band or a reggae sound could make that fast or that or that amazing deep beat in every typical punk song. So it’s pretty interesting how they incorporate that into their albums.

REBECCA: Yes, I recommend it, and still to go through their music. It’s really good. What other song did you enjoy?

VINCENT: I enjoyed their song “Rise,” from their album titled “Rise” in 1993. “Rise” was their first album to be released on a major record label. You can tell their was a difference. The instruments were not so “In your face” as “Sailin’ On.” The tempo went from fast, to slow, and then back to fast, back and forth like that.

REBECCA: And that’s the cool thing about “Bad Brains.” That they always kept positive messages incorporated in their lyrics. So I know for punk music, people stereotype the music as angry, pissed off, white teens. It’s not really about that with “Bad Brains.” They had this mantra that they kept spreading around whenever they played called PMA, positive mental attitude. And they always wanted to incorporate that, in every performance they had, every album they had. It just “Bad Brains,” it’s who they are, it’s reggae, it’s love. I like how they incorporate the fast sounds of punk, the typical punk sounds, but the message is pure love and positivity and radiant love to one another. It’s pretty interesting how a band like that can incorporate all that stuff together.

VINCENT: Yeah that’s a really cool thing. Now that you mention that I kinda noticed that, it’s pretty cool how their message stays the same between “Rise” and their debut album. They’re trying to keep that positive message. Their first song was about, like when you think of a breakup song you think it’s going to be a melodramatic, piano ballad, but instead it’s uplifting and invigorating.

REBECCA: You already know the words for this song, like this type of genre. They’re always trying to keep their message positive. That was one of their main goals as I said. It’s crazy how a band could have all this positivity and still be black-belled from all these clubs and a city where they were growing with gigs. It backfired on them in a way that gave them more audience members. I’m glad they’re still producing music and sending the same message after all these years.

REBECCA: I think one of my other songs that I love by them. It’s one of their first songs that I started listening to by them. It’s called “House of Suffering,” from their album “I Against I” in 1986. This song makes you want to go to a punk show and just hang ou tin the pit. I don’t know if you’ve ever been to a convert where they have a big pit in the center?

REBECCA: This is the perfect song to just let loose. Like leave your energy in the pit and release your negative emotions and of course stay positive.

VINCENT: Oh that cool how they can be so positive but at the same time be pure punk and reggae.

REBECCA: Yeah it’s cool because they originally started as a jazz fusion type of band called “Mind Power” around 1976. After that I guess they discovered their sound and christened themselves as “Bad Brains” in 1975 in D.C.. Amongst those other people there was “Black Flag” coming around and who else? I guess you can say they were angry like the “Sex Pistols,” but they were conveying a different message. You can kind of relate them to the “Ramones,” who had a very monotone sound, their music sounds the same to me. I hope nobody gets offended by that.

VINCENT: I can see why you would say that. That type of genre is very like, beat that you just recognize.

REBECCA: Yes, automatically. “Bad Brains” is one of those punk bands where you could just continuously listen to their music and not get tired of it. I never get sick of it, and I’ve been listening to their songs for seven years now. So even now I was saying before we started that I listen to one of their albums at least once a week. Almost their entire album is part of my Spotify playlist. That’s all I listen to I swear!

VINCENT: I know what it’s like to love an artist so much that you listen to them on repeat over and over again. It’s cool this band has done that for you.

REBECCA: Yes I love them. Do you have one more song that you like or is that it?

VINCENT: I had one more song. It’s from their most recent album “Into the future.” I noticed they jump around record labels a lot, so that’s kind of interesting that they keep jumping around. The song is called “Into the Future,” front their 2012 album. You could tell, like it was 40 years after their original album. Again they were keeping with their message of positivity. Their lyrics were just about things that could happen in the future, like they could be with somebody or something bad could happen, but just keep going and see what the future brings. Like a dreary tone of anything could happen.

VINCENT: I hope they do. Up until now, not too long ago I used to think the same thing, that punk music was just a lot of noise for people who were always angry. Now that I look into it I see that it has a strong message behind it.

REBECCA: And sometimes the message is political, too. Like their song “Big Take Over” their lyrics are pretty specific and pretty strong. Pretty good idea of what’s going on in U.S.A. at the time. At one point it says “The world is doomed with its own segregation, Just another nazi test.”

REBECCA: Yeah it’s very powerful. An usually people who listen to “Bad Brains” love to listen to the melody of it. They don’t really listen to the lyrics which is the most important part of the song. People think their songs are just for fun. On the other hand, a lot of tier music had a lot of strong political messages about what going on around them at the time. But I’m happy you joined me with this podcast. Did you find any other interesting information about “Bad Brains?”

VINCENT: I noticed they disbanded a lot.

VINCENT: Yeah definitely. The band he created is pretty interesting.

REBECCA: Yeah, you were saying, did you find any information about them?

VINCENT: Jus the fact that they’ve, usually when a band breaks up, that’s it, but they kept coming back for more and more music. It’s really cool. As I learn more about them it’s a very interesting band. Hopefully they keep making music for a while.

REBECCA: I hope so, too man. They gotta keep that genre strong man.

VINCENT: And hopefully people keep taking up the mantle of “Bad Brains” just to keep their whole idea of positive punk going.

REBECCA: Well thank you so much for joining me, Vincent. Hopefully we get to do another podcast like this I really enjoy talking about punk music. I’ll be posting more assignments like that on Camyak. So feel free to grab them!

VINCENT: Oh I will definitely!

REBECCA: Okay well thank you VIncent. Thank you for joining me. Is there any last goodbyes you want to say to our audience?

REBECCA: Okay thank you, Vincent. Thank you for joining us and be sure to catch our next podcast soon everybody. Stay tuned! Bye!