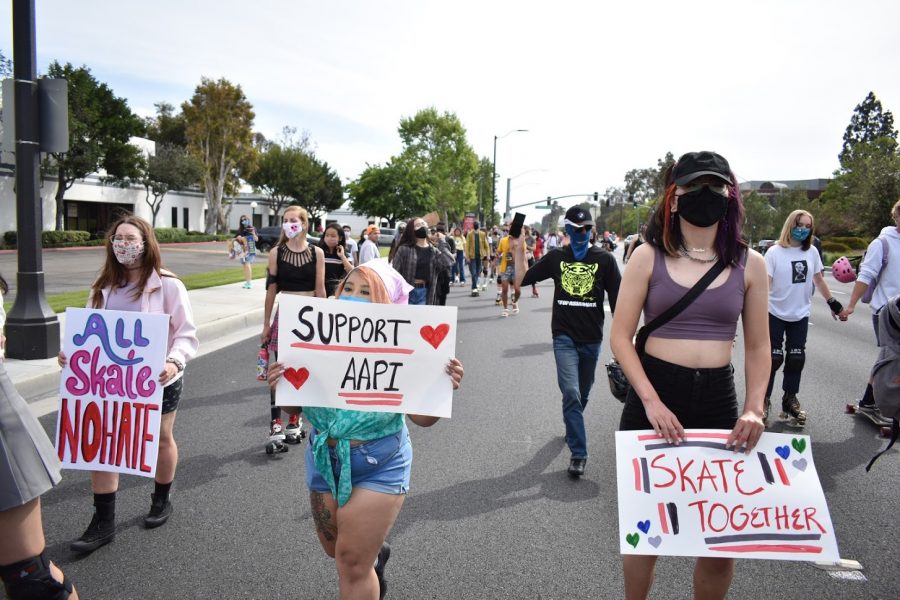 Protesters skate to protest the attacks on the AAPI community on May 1, 2021. The protest marked the beginning of AAPI heritage month. Photo credit: Vincent Medina

VINCENT MEDINA: A Skate to End Hate protest was held at the Tustin Legacy Skate Park on May 1, to mark the start of Asian American Pacific Islander Heritage Month. The protest was also held in response to the assault on Jenna Dupuy, a Puerto Rican-Korean-American woman who was attacked at the skate park on April 11.

Despite warnings from the Tustin Police Department. protesters skates in the streets there rode around the block to call for an end to the rest of the attack on the AAPI community.

Protesters also reported the Tustin police officers attempted to intimidate them by riding their motorcycles very close to protesters and revving their engines.

Demonstrators also listened to live music from the band Cardboard Treehouse and watch a demonstration from the Hybrid Academy on how to use Ju Jitsu, as a form of self-defense. Skate to End Hate plans to hold future demonstrations to protest the attacks on the AAPI community.