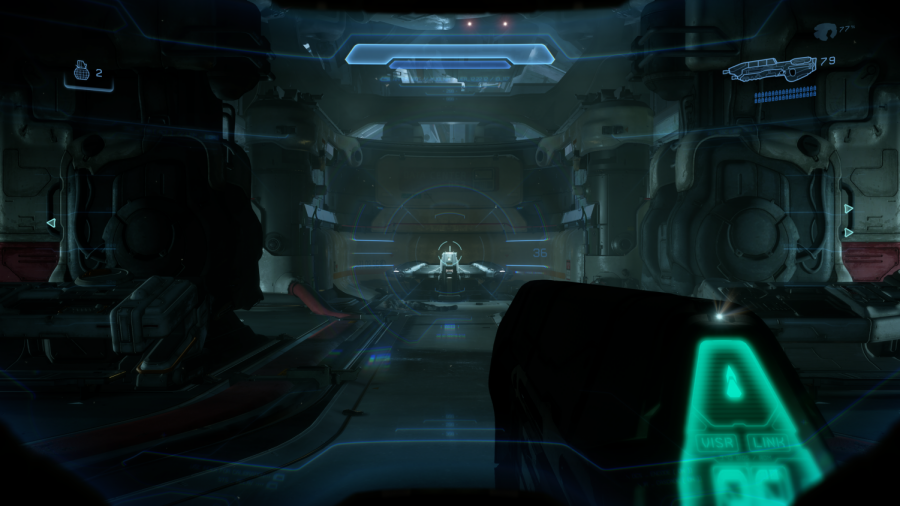 In terms of movement and gunplay, Halo 5 felt the most fluid. The player felt like a Spartan who acted with a sense of urgency as they went about saving the galaxy from a malfunctioning AI.

Matthew: This is Talon Marks’ Sidechat once again, and this is your host, Matthew Espinosa. I’m joined by Sebastian Colmet Daage from Sunnyvale, California.

Matthew: Thank you for making—I mean, taking the time to discuss this subject with me today. And the subject we are here to discuss, that is, is the campaign of Halo 5, and whether it’s actually as “atrocious” as the fans say it is, you know?

Sebastian: Yeah, I played the fifth one about, I’d say, a week or so after its release—I’m not sure. But I have also read a few Halo novels when I make up the time, like, uh, the Evolutions book and the Cole Protocol one.

Matthew: I played it, like, five years after its release? So I didn’t—wasn’t caught up with all the hate it got when it was released; the only thing I knew for sure was that the universal opinion on the game was basically: campaign “bad,” multiplayer good.

Sebastian: I personally wasn’t as concentrated on all the details as the more hardcore gamers were, but I did notice a few flaws concerning the events before the game was released.

Sebastian: Well, the advertising campaign made the story out to be a little bit more than what actually it was. As if the story was supposed to be a lot more complex than what we got. Like, what was with Chief walking around in the middle of a desert wearing a poncho? And why didn’t we get a climactic fight over ideology between Locke and Chief?

Matthew: You… wouldn’t say it was like Rise of the Skywalker bad, though?

Sebastian: Oh, no, nothing like that. Just in general, some misconceptions about the campaign, because logically, the story, I feel, is sound.

Matthew: Got the same feeling, too. Another argument, though, against Halo 5 is that the story is bland, that it needs some “homework” to be done so you can understand it better.

Sebastian: I’ve heard that one, too, but I [didn’t] mind all that much when I played through it. Seemed like every other Halo campaign to me.

Matthew: Mmm, yeah, but not quite. Just to clarify first, before we go any further, I’d like to clarify the story of Halo 5.

Sebastian: Of course, of course.

Matthew: The story of Halo 5 is centered around Master Chief’s search for a rogue Cortana, his AI friend who now wants to rule the galaxy with the Forerunners and the Covenant, as well as Spartan Locke’s mission in arresting Chief for not standing down when Chief realized that Cortana didn’t die as was implied in Halo 4’s ending.

Matthew: Yes; for people to say that Cortana going rogue is random is kind of dumb, because we can clearly see in Halo 3 that the Gravemind, the overseer of the Flood virus—a zombie virus, basically—was affecting her in a negative way when Chief finds her in the burnt-out shell of High Charity, the former home to the Covenant’s theocracy. Halo: Evolutions, the book you mentioned before, also confirms that the Gravemind somehow infiltrated Cortana’s mind and tortured her endlessly and effectively making—speeding up her death.

Sebastian: Oh, yeah, and an AI’s death is essentially them just making themselves think to death, right? Because they’ve gathered too much information?

Matthew: Yes. In addition, it makes sense for the Elites, the Covenant’s former upper-class warriors, to be divisive about breaking away from the Covenant and living on their own. The entire species, after all, was manipulated by the Covenant Prophets to be devout servants and so it must be difficult to shrug off all that religious dogma they were fed; to be left without purpose.

Sebastian: That they would, like, follow the Forerunners in Halo 4 and 5 also fits since they’re supposed to be the gods the Covenant believed in.

Matthew: Personally, on the whole, I think that this universal opinion of the campaign being bad is just kind of like, an idea that was taken up by a particularly vocal portion of the community that spread around and has now taken hold.

Sebastian: The same can be said for a number of games. Although, I wouldn’t be surprised if a bunch really are as bad as everyone says they are. One more thing to remember about Halo 5 is that Forge and a custom games browser weren’t released on launch date. It was frustrating, for sure, but a lot of people seemed to forget that making a game takes time because the team coding is human, not a bunch of AIs.

Matthew: The same thing is happening with Halo: Infinite, but given some retrospection, I think people have started to realize that the game will need to take to be fully developed especially after Cyberpunk’s buggy launch.

Sebastian: Speaking of development, for a game that’s really futuristic, people don’t really want it to evolve and change.

Matthew: Halo needs to evolve, yes. Otherwise, people will complain that it’s the same; similar to what’s kind of happening with Call of Duty and its World War II setting.

Sebastian: … Yeah. I think the general idea of what we have come from all of this talking is that…

Sebastian: Yes, I think what we have come up with is that Halo 5’s story isn’t entirely all that bad, it’s just that it was too complicated in terms of lore for people to get the full impact.

Matthew: And that the advertising campaign and lore presented in the games didn’t quite get through players’ heads.

Sebastian: Yeah, it seems like they didn’t pay attention to the cutscenes during Halo 2 and 3.

Matthew: Mmm, yes, well, I think that concludes our podcast, thanks again for attending, Seb. I’d say the message behind this session is to go back and pay more attention to what happened in the previous games to better understand what happened. I just gotta find another video game subject to discuss for another one…