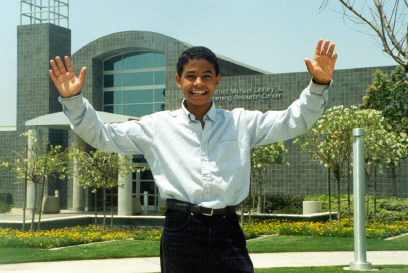 Joshua Ballard has a motto: “Today’s dreams are tomorrow’s realities.” At 11 years old, he’s not just dreaming about his future, he’s making them a reality while teaching others how to plan for theirs.

This summer Ballard taught a class at Cerritos College this summer entitled “Future Millionaires and Junior Entrepreneurs.” The ten day class began on Monday June 25 and ended on Friday July 6.

Cerritos College is one of three colleges at which he taught. He was invited to teach at every Adult Community Education/Adult Ed/Youth and Kids College Program in Orange County. The other two colleges are Golden West College and Orange Coast College.

HOW HE GOT STARTED

“I needed a Palm Pilot and lap-top computer, so I decided to come up with a curriculum to teach other how to make money,” Ballard said in explaining how he came upon the idea to teach the class. He will be using his skills to teach others how to use theirs.

Now why would an 11-year-old need a Palm Pilot and a laptop computer? To build websites for professional companies, of course.

Ballard is an independent consultant for Executive Connections Network, a company specializing in financial, accountancy and consultancy professionals.

An independent consultant is someone who is not a company employee, but works for the company independently at their own pace and initiative. The company trained Ballard and provided him with their software, but he works on his own designing websites for the company’s clients.

Not only does he design their websites, but he also teaches people all over the United States how to make websites based on the company’s software.

Where do the laptop and Palm Pilot fit in? They’re so the young professional can work on the sites where ever he goes.

For those wondering how an 11-year-old got into the consulting business, it’s a simple matter of fate. While attending a Christian Business Expo some time in February or March, he visited all the booths there — but completely missed Executive Connections Network.

His mother, Gail Ballard, was the one who introduced him to the CEO. According to his mother, the two had an instant rapport. The CEO thought that the boy would be the perfect employee. He started working for them right away. He has been working with them for five or six months. The opportunity was there, and he jumped on it.

He didn’t just jump in to website development cold, however. Before the age of 9 he took a computer class for elementary school kids and caught on so quickly that he became the teacher’s assistant.

“The first day of class, I wore out the teacher with questions,” he said with a grin. The second day of class, he was going around helping the laggers catch up. It was then that his mother saw her son’s gift for teaching.

The second computer class he took was a computer networking class for kids from 7th to 12th grades. He was the youngest student in the class at 9 years old.

His mother was afraid that the instructor would object to him being there, but once again, after the first day of class, he took his place by the instructor’s side as a TA.

Joshua passed the class with flying colors. In fact, his networking class instructor is the one who recommended Joshua to teach at Cerritos College.

Not only is the boy a web designer and an independent consultant, but he is also his older brother’s PR agent. Christopher Ballard, who is 13 year old, is a highly-sought after, highly-paid professional violinist and pianist.

He makes an average of $2,000 per performance and has performed at more than 50 different government, corporate, and fund raising functions.

The younger Ballard has also won numerous musical contests. He was invited to perform at a showcase of local talent entitled “Clearly Talented Youth of L.A.” and appeared on the television show “The Kids Club.”

As his brother’s PR agent, he produced a music video of his brother and sent it to the Bush Presidential Inauguration Committee in Washington D.C. The older brother was then chosen to play solo violin in the inaugural festivities.

Ballard, his mother and his father went to watch his brother play. Afterward, both boys had a chance to speak to the president.

According to his mother, President Bush told the two boys that he could see in them the potential to become future U.S. Presidents.

The meeting with the president strongly impacted Ballard and literally changed his life. “That gave me inspiration,” Ballard said. “I plan on becoming the President of the United States.”

With his intelligence, his winning smile, his engaging personality, his strong Christian faith (an inheritance from his parents) and his clean-cut good looks, Ballard just may succeed in becoming the nation’s first African-American president.

Of course, none of Ballard’s success would have been possible without the support and encouragement of both his parents.

Ballard’s mother, who has homeschooled her boys for the last seven years, taught Ballard everything from academics to life skills. She took him to various classes to explore where his talents lay, such his computer and networking classes.

The boy not only learned addition, subtraction, reading and writing, from his mother — he learned how to do the laundry, etiquette (how to be a gentleman), and the dishes.

But the foundation she and her husband laid for their children’s growth is character, teaching them principles such as love, sharing, and forgiveness.

Ballard’s father, Rick Ballard, was his son’s role model — and best friend. “My husband is not just a great dad, he is Christopher and Joshua’s hero and best friend,” Ballard’s mother said.

Ballard’s father, who is a drapery installer, taught his sons that it takes character and integrity to be a good businessman. “As a businessman, he models for the children good work ethics about being honest and fair,”

Ballard’s mother said. “Rick has instilled confidence in our children by always reminding them that they can achieve greatness if they set their goals high enough and focus on their objective.

“Because of Rick, our boys have no doubt whatsoever, that they can become whatever they set their minds to do.”

Ballard’s confident carriage and easy-going manner can be explained by his father’s constant encouragement and coaching. But above all, the boy’s father instilled in his son deep faith in and love for God. “He always reminds our children to put God first in everything they do and to acknowledge that their talents come from God.”

Ballard’s remarkable humility about his talents reflects his father’s influence. “I give all the glory to God,” Ballard says.”He gave me this gift.”

Ballard’s ten-day class at Cerritos began June 25 and ended on July 6. Each class ran for about 2 hours, from 1 p.m. to 2:45 p.m. each day. The class was open only to youths from grades four to eight.

In his class, Ballard helped students come up with money-making ideas by taking an inventory of their hobbies, skills, and academic strengths.

Through this inventory students’ were matched with businesses they would be most suited for and would enjoy.

“I taught the students how to develop their business plans, build a business portfolio, and create business cards and choose the ideal business for them,” Ballard said, “I offered the students hundreds of creative business ideas to choose from.”

Students also learned how to expand their business and where to find the best investment opportunities.

Ballard’s mother, who has a Master’s Degree in Education from Boston University, helped instruct the class with her son.

Together with her son, Ballard’s mother came up with the curriculum for the course. They prepared for the class for the past year, reading more than 25 books on business.

Sharon Tyson, the mother of Marcus Tyson who took Ballard’s Cerritos class said “I thought [the class] was very well done and I was very impressed. [Marcus] enjoyed the class. He learned a lot.”

Twelve year old Carter Jones, Ballard’s student from Orange Coast, gave up other things that he had planned for those two weeks in order to dedicate time for the class. He now runs a successful one man doggie-treat business. “I thought you had to be 35 years old or an adult to start your own business. Joshua really inspired me,” Jones said.

Derek Neugebauer, an 11-year old graduate of Ballard’s class from Golden West, now runs Derek’s Cookies and Candies. “The class was very fun, and I learned a lot,” Neugebauer said,”If I had the choice to do it again, I’d do it.”

One of the things that Derek learned from the class was that selling a product rather than a service made for a higher profit margin. “I tried to pick what sells really well. People love cookies.” “My business is doing really well,” Neugebauer said.

No parents attended the class except for the first day. Parents who wanted to learn more about the class were invited to stay. On the last day of class there was a business expo to which students invited their parents and friends to attend.

According to Ballard, at the business expo, each student gave a short presentation of his/her business. Later, the audience was invited to visit the booths. Students who had launched service businesses picked up new accounts and customers in the audience. Kids who were selling their products earned a lot of money.

Ballard said that during the business expo, each student had a booth where they displayed their products, business cards, marketing flyers, and business portfolios.

And how does Ballard feel about the results of the class? “It exceeded my wildest expectation,” Ballard said. “Many students who graduated from the class invited their friends to take my next class. One graduate is now earning $140.00 a week. Another graduate started an internet business and he was in the newspaper last week. The last day of class, I told my graduates that I would be looking forward to hearing about their successes on T.V. and in the newspapers.”

Based on his students’ success stories and enthusiastic responses to his class(testimonies), it looks like Ballard was successful in helping his peers make their dreams a reality.

Ballard invites those who would like to contact him to e-mail him at [email protected] You can also visit the website he built for his brother at http://www.christopherballard.com.