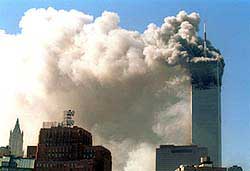 American Airlines flight No. 11 was on its route from Boston to Los Angeles when terrorists apparently hijacked the aircraft and slammed it at full speed into the north tower of the World Trade Center, killing all 81 passengers, 11 crew members and an unknown number of terrorists on board. Approximately 15 minutes later American Airlines flight No. 175 carrying 54 passengers and nine crew members met the same fate when it was crashed into the twin towers southern tower.

Both towers, which had a capacity to hold 50,000 people, were believed to fully occupy at the time of each crash.

Half an hour after the second crash at 9:43 American Airlines flight number 77 carrying 58 passengers and six crew members took off from Washington D.C. on route to San Francisco but was also hijacked by terrorists and slammed into the Pentagon.

The last of the four crashes believed to be a failed terrorist attack occurred at 10:10 am. United Airlines flight No. 93 carrying 38 passenger and seven crew members crashed into an empty field, killing all on board.

The fallout and reactions to these attacks have been widespread and monumental.

At the current time over 10,000 people have reported injuries, and the death toll is expected to rise well into the thousands.

Minutes after the initial crash the FAA for the first time in American history halted all flight operations in the United States and diverted all international flights to land in Canada and Mexico.

The Centers for disease control and prevention is also on high alert, preparing bioterrorism as a precautionary measure and a state of emergency was declared by the city of Washington and San Francisco.