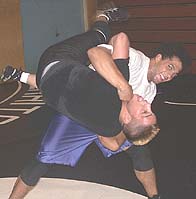 The Cerritos College wrestling team finished fourth in Southern California and eighth in the state during a successful season in 2000. Can the 2001 Falcon squad upgrade that standing?

“We have a solid team and we are confident we can do better than last season,” said Cerritos coach Greg Gascon, who’s team returns some solid veterans and a host of talented newcomers.

Newcomers such as: Troy Owen, a four-time New Mexico state champion, Anthony Rodriguez, a California state Champion and Marco Lara, a fourth-place medalist at Nationals, are among the new talent that strengthens the team.

Returning are team captain Josh Johnson and Juan Revuelta, whom both placed sixth for Cerritos at last season’s state championships.

“We’re a great team, we can make it as long as we’re all willing to work hard,” said assistant coach Brian Gilliland.

Freshman Troy Elam believes the team is “on the road to winning the state championship. We have a lot of talent, returning state placers and good leadership from the coach and team captain.”

The team’s first test is a key intersquad match scheduled for Monday at 7 p.m. in the Cerritos College gym. The outcome of the matches will determine who will start at upcoming matches.

Cerritos’ first team test will come on Sept. 19, when the team take parts in the one-day Sacramento City College tournament.