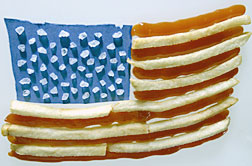 (KRT) — They indulge in broad daylight, on a crowded city street, but that is not to say they are without shame.

The gray-haired government worker declines to give her name: “I don’t want the whole world to know.” The hip twentysomething spits out a terse “no comment.” And then there’s John Vogel, the 48-year-old firefighter who is hunched, sheepishly, over the telltale red carton.

Why after all the warnings from the experts, the disturbing studies, why_under threat of dire health consequences up to and including death_do we, the American people, continue to hit the french fries?

“Cause,” Vogel says with a smirk, “we’re basically weak.”

That’s right. We, the people, can outlast the Soviet Union, export Madonna, and make the whole world cry out, “I want my MTV!” But, as a spate of recent news stories so vividly reminds us, when it comes to the humble french fry, victory remains elusive.

At a time when McDonald’s is rolling out a new and improved french fry (Now, with healthier fat!), when a New York man is suing fast-food chains for contributing to his illness and obesity, when high-profile medical studies are raising new concerns, the average American is eating at least 24 pounds of fries a year.

That’s 56 Super Size servings at McDonald’s, or more than six times the amount of fries the average American consumed in 1960.

That’s enough to make the fry “the leading side dish in America,” says David Graulich, author of “The French Fry Companion: A Connoisseur’s Guide to the Food We Love.”

And even the No. 1 Side Dish title may sell the french fry short. More than hot oil, salt and starch, it is, by now, a feature of the cultural landscape, a symbol of comfort and childhood, of simple needs and honest pleasures.

“It’s an American tradition,” says Chicago attorney John Tellis, pausing in his assault on a golden heap of Wendy’s fries.

“It’s a food item that we have adopted and embraced, and it’s not going anywhere.”

Our passionate _ if sordid _ love affair with the french fry incorporates many of the great themes of American life: capitalism, immigration, technology and equality.

Born in France and Belgium, the fry can actually trace its roots to Peru, where 16th-century Inca farmers cultivated potatoes _ some purple, some as big as your forearm _ in the valleys of the Andes mountains. The Spanish invaders brought the vegetable back to Europe, where it was embraced, first as an ornamental plant, then as a cheap food for peasants.

With the arrival of inexpensive, mass-produced cooking oil, the french fry began to surface in France, Belgium and Britain in the 1860s, according to Larry Zuckerman, author of “The Potato: How the Humble Spud Rescued the Western World.”

“Everybody claims it happened there first, but it’s not entirely clear,” Zuckerman says.

In Britain, the wealthy looked down on the potato as a food of the poor. But in the United States, that class prejudice never took hold, Zuckerman says.

There are tales of Thomas Jefferson eating fries as a diplomat in France, and perhaps even introducing them to the White House. But students of fry history tend to credit World War I, when American soldiers developed a taste for the thinly sliced fried potatoes they sampled in northern France and Belgium.

That may be why fries are called French in the U.S. Or maybe not. Another theory, Graulich says, “French Fry Companion” author Graulich says, is that “frenching” refers to the cutting method employed in making fries and other thinly sliced vegetables.

Either way, its foreign origins make the fry as American as apple pie _ itself a German dessert featuring an Asian fruit.

American cuisine is full of favorites that were born abroad, among them hot dogs, hamburgers and pizza, according to Meredith Sayles Hughes, managing director of the Food Museum Web site (foodmuseum.com).

But if the potato was widely embraced in America, it remained somewhat impractical in its labor-intensive deep-fried form. In 1960, the average American still ate less than 4 pounds per year of fries made from frozen potatoes, according to the United States Department of Agriculture, a fraction of the 24 pounds per year consumed today.

What the hard-to-freeze fry needed was a technological boost, and it got one when McDonald’s teamed up with Idaho potato magnate J.R. “Jack” Simplot, a.k.a. “Lord of the Fries,” a.k.a. “Mr. Spud.”

McDonald’s, which wanted to expand in the 1960s, recognized that it had a problem. Its fries, still made from fresh potatoes purchased at local supermarkets, varied in quality from store to store, and even, at times, from batch to batch.

Enter Simplot, an eighth-grade dropout with a homespun manner and a can-do spirit, who agreed, on a handshake, to help McDonald’s develop a commercially viable frozen fry. Simplot did just that, according to Graulich, discovering a process that countered the destructive effects of freezing by drying the pre-frozen fry with air and then frying it rapidly.

McDonald’s was freezing all its fries by the early 1970s. Meanwhile, eating habits were changing with Americans, increasingly, demanding meals on the run. Per capita frozen potato consumption shot up, from less than 4 pounds a year in 1960 to 20 pounds a year in the late 1970s, according to the USDA.

French fries make up the majority of frozen potatoes, and fast food restaurants are our biggest source of fries, according to USDA economist Charles Plummer.

To some, the rise of the industrialized fry is a uniquely American story.

“I do think it says something about our genius for taking basic ideas from other places in the world and applying technology,” Graulich says. “I mean, what other country would devote so much technology to a little sliver of potato?”

Fans celebrate the fry, a subtle yet satisfying blend of mild flavors and soothing textures, as an irresistible sensory experience. “It’s the only fried food I can’t give up,” says a 24-year-old accounts payable coordinator. And there’s no shortage of explanations for the tender morsel’s enduring appeal, from the psychological_it’s a finger food we bond with in childhood_to the practical: “It tastes good.”

But, however delectable, the modern fry has its detractors, with nutritionists saying that, particularly in its popular Super Size incarnation, it contributes to rising obesity rates and related health problems, including heart disease.

“Diet (coupled with physical inactivity) kills as many people as tobacco,” says Margo Wootan, director of nutrition policy at the Center for Science in the Public Interest. “People know smoking is deadly. But they don’t think french fries (are).

“`They’re not going to kill you.’ That’s what people think. But what they eat is as important as whether or not they smoke.”

In June, a cancer scare involving acrylamide, a potential carcinogen found in common foods, including some brands of fries, brought yet more bad PR.

Then a July report from the Institute of Medicine, part of the National Academies of Science, targeted a fairly common french fry ingredient: artery-clogging “trans fat.” The institute identified trans fat as a prime cause of “bad” LDL cholesterol in the bloodstream.

McDonald’s has started switching to a new cooking oil that will reduce the trans fat and saturated fat _ both linked to heart disease _ in its fries. Trans fat in a small order of fries will fall 47 percent to 1.8 grams. Saturated fat will fall 17 percent to 1.9 grams. That’s a step forward for the fry nutritional profile, but calories (210) and the total fat _ 10.2 grams _ will remain the same.

Visit the Chicago Tribune on the Internet at http://www.chicago.tribune.com/