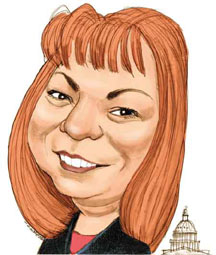 Congresswoman Linda Sanchez, representing the new district of Lakewood, Long Beach, Whittier, Cerritos, Hawaiian Gardens, La Mirada, Lynwood and Paramount, spoke on Monday at the student center on her experience with pioneering in the world of politics and legislation as a woman.

Sanchez grew up with seven brothers and sisters to two native born Mexican parents. Her parents came to the United State with little money in their pockets, some education, and no jobs.

Growing up, her family was economically challenged. Her parents worked hard to achieve things. As a daughter of a traditional Mexican family, she noticed early on the certain status of every person and how differently people were treated.

Certain things her brothers were allowed to do such as stay out late were not expected of a female. In order to go to a movie she would have to do a few extra chores. Why didn’t her brother have to do more chores?

Women were given more responsibility than men were. When she approached her mother about how she felt, the only answer her mom could give her was “That’s how it is. Get over it.” or “If you feel so strongly about it, go to law school.”

At an early age, she developed this idea that she could change things some day; though she never thought she would be a congresswomen let alone speak in front of a large group of Cerritos College students.

Sanchez made it to law school through a variety of student loans. She then had the opportunity to intern for the National Organization of Women (NOW) where she cut down on issues about women empowerment.

One case that stands out during her time at NOW was an active legislation case about a girl who was constantly sexually harassed by a group of boys. In tears, she would visit the school’s counselor in time of need. The counselor obviously didn’t care enough, and never made any effort to report the incidents.

Later on the girl and her parents took the school district as well as the counselor to court to sue. And that was that.

Sanchez also learned through NOW why rape victim’s cases aren’t looked at right. When jurors look at a typical rape case, they think all rape victims are attacked in a dark alley with a weapon. But when there is a case where the victim knew the person, the attacker is let go.

As part of her internship, Sanchez taught judges to recognize that not all women are assaulted in alleys. Most rape victims are attacked through people they know which judges and jurors haven’t been aware of.

According to Sanchez, the Civil Rights Act of 1969 was not just for minorities of other races, it was for women too.

Provision Title VI & VIII are very important for women. This Title is to teach higher education for women.

Sanchez made a point to the audience saying, “Most young women today don’t know how this provision has impacted other women. Women broke down barriers that had never been. Women were given economic opportunities and non-traditional careers.”

Only being in the house for eight weeks now, she explains that even though the country is 50% women, only 13% women make up U.S. Federal Congress.

When talking about age, she says, “Most of the women in Congress have already had their family and raised their kids. I’m the youngest woman there.”

Currently, Sanchez is one of the many women in this country disappointed in the Bush administration. Back in 1994, Congress passed a bill called “Violence Against Women” which reduced violence against women who were abused by the opposite sex. This gave women the right to take their offender to court and sue.

In May. of 2000, the Supreme Court struck the bill down. Under the Bush administration, new legislature is taking affect to undue women’s rights. Bush also wants to seek new judicial judges who have a strong belief of taking reproductive rights away.

Tiffany Garcia, Vice President of ASCC, spoke about women rights saying, “She directly reiterated many things that affect women today. The 13% of women in Congress fight for us. Without that 13%, we can’t be that 50%. I think there is hope under the Bush administration”.

After the seminar was over, Sanchez gave students the opportunity to ask some questions. After she answered a few, she thanked everyone and accepted a gift from Dora A. Lozano, Re-entry Resource Specialist, for coming to Cerritos College to speak.

Shawn Hernandez, social welfare major, talks about his feelings of the seminar saying, “Women who are not in as much power as men breaks my heart. Everyone should be equal”.

Sanchez’s advice for young women who want to make a difference is to get involved and support their candidates. “Every woman deserves a place at the table. Women who are interested in their rights should also look at what’s best for Congress and their country”.

Nora Vicente, child development major, says about women’s issues, “I learned to support our leaders. As women, we should reach out to other women to make a difference in the community.”

Linda Sanchez says she is willing to stand up for women everywhere. After all, who said women are second-class citizens?