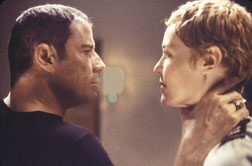 McTiernan’s “Basic” is anything but. John Travolta stumbles along in his usual strangely endearing fashion in this latest offering to the Suspense genre.

A military crime drama, “Basic” centers around the investigation of a “Training Accident” in a jungle in Panama. An exercise gone awry leaves four dead, one of whom is Samuel L. Jackson, an infamous Ranger training Sergeant, a man in the hospital and an uncooperative prisoner.

Enter Travolta, a DEA agent of dubious reputation, to assist Captain Osbourne, the military investigator, portrayed by Connie Nielsen. Travolta helps out in an unofficial capacity at the behest of an old friend, Tim Daly, who is now the base commander.

The two survivors offer widely different accounts of the incident in question, leading Travolta and Nielsen in an ever-shrinking circle of deception and cover up.

Being Panama of course, the murder and betrayal center around illegal drugs, ‘combat cocktails’ for the soldiers and everybody’s favorite white powder for the civvies back home.

The final twist saves this film from being just another Kyser Soze and offers a sense of optimism not usually found at the end of a trail of blood. Poirot eat your heart out.

Nielsen, surprisingly, is the main character of the piece, while Travolta is the somewhat shaky hero. Other than forgetting where she put her accent at times, Nielsen turns in a solid freshman performance while taking an unlikely backseat to Travolta.

Pushing her to question everything, Osbourne’s starry eyed, by the book style is in conflict with his seat of the pants maneuverings and cynic’s view.

Their rapport, while clichÃ©, efficiently illuminates the foibles of these characters without bogging us down in explication. Unfortunately, the Osbourne character’s growth is somewhat shadowed by Travolta.

Always larger than life and calling to mind images of Chester Cheetah, Travolta does not disappoint, however. Sam Jackson lends an added dimension of credibility, showing off his strength of charisma in his brief moments on screen.

Harry Connick, Jr. and Giovanni Ribisi round out a solid corps of grunts. Fans of slash cuts and shaky cams rejoice. Arguably the father of modern cinematography, John McTiernan, of Die Hard and 13th Warrior fame, helms this one.

His quick strokes and tight angles heighten the intensity in a script that had the potential to lag a bit.

All in all “Basic” was definitely worth the price of a matinee admission, and it never hurts when the AC works.