Protest bothers some, but not others 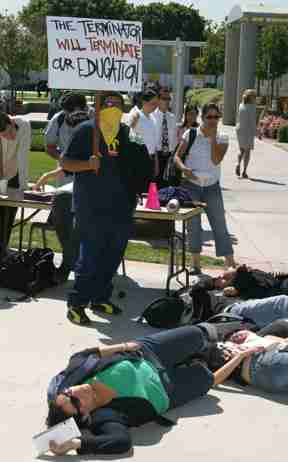 Protesters participate in a "Die-in" in protest against the rising price for and lack of funding for higher education.

“…Get up stand up, stand up for your rights…” student protestors echoed the words of singer Bob Marley’s song titled “Get Up Stand Up,” as they protested about tuition increases Tuesday.

Campus Police arrived less than ten minutes later, and the protesters were asked not to block the sidewalk located in front of the outside stage in Falcon Square.

Castillo said that although the protesters have the right to protest, they have to do it the right way and follow the law.

“Do I have to paint a picture with a crayon?” Castillo asked in reference to the protesters’ continued blocking of the sidewalk.

“Is it blatant disrespect, or are these people just pushing to see what happens?” Castillo added.

Others, who were also in the vicinity however, didn’t share the same view.

James Bell, a recruiter from Springfield College who was present at the Mini College Fair sponsored by the transfer center, felt that it was not a disruption but rather encouraged the students’ vocalization of their beliefs.

“Hopefully they take that with them when they graduate,” Bell commented.

He also said that his views did not reflect those of Springfield College.

“I actually kind of liked it, it’s a good thing,” she said.

Despite the nearness of the protest to the WPMD, those who were in the building at the time also were unbothered by the situation.

Laura Lopez, broadcast major, who was in the WPMD building at the time, looked out to see what was happening, and said that it was good that they were protesting and that they should also protest out in the streets to inform others outside of campus.

Cerritos College President Noelia Vela was in a meeting during the time of the protest. She had no knowledge that a protest had taken place and therefore declined to comment.