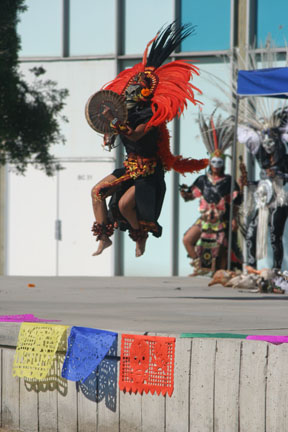 The Mexican Dia de los Muertos (Day of the Dead), coinciding with All Saints Day, and the following day’s All Souls Day, remembers and celebrates the lives of those who have passed away, through dance, pounding rhythms, and an air of celebration.

The Day of the Dead is a two-day event remembering children, or “angelitos,” on the first day, and adults on the second.

Patricia Orellana, undecided major, explained the significance of the division.

“In (Mexico) we don’t bury children with adults. (Children) are called little angels, as they are untainted with life. So we bury them separately.”

The event, Orellana said, was put together by the student body.

Students gathered in the amphitheater to watch the dances of Xipe Totec, an Aztec group that had been invited to the campus by MEChA. The dancers wore traditional Aztec outfits, bearing bones and feathers, dedicated to the god of death.

Gabriel Casteneda, drummer for Xipe Totec, said, “The skeletons celebrate new life. Skeletons are a machine for the spirit and when the spirit leaves the body, (it starts a new life).”

The dancing bespoke of a time long ago, when it had been a part of the Aztec worship ceremonies.

Orellana said, “It is a blessing event, strictly culture.”

Some campus clubs, having been offered the opportunity to participate in the event, worked at booths to raise money for their respective groups.

He said that relatives of the deceased create altars on which they place a variety of items that their loved ones had once cherished and enjoyed, such as food and hobbies.

He also said, “The story says (the dead) come back and eat the food, but it’s actually the relatives who eat it.”

The event bore a political message as well, as the FMLA joined, not only to celebrate, but also to fight for minority rights.

The group placed its statement on the altar, a picture that declared “No on prop 73 (parental notification before abortion).”

Matthew Zabala, English major, said, “We are trying to show respect for our Mexican heritage, and the rights of women.”

Lining the hillside of the amphitheater were colored crosses signifying the fallen soldiers, those who were killed by Hurricane Katrina, the murdered women of Juarez, and all others who have died.

Speaking of the traditional practice, Clemente Gomez, undecided major, said, “In Mexico, people go to cemeteries with mariachis and flowers, to celebrate and restore their loved ones’ tombs.”