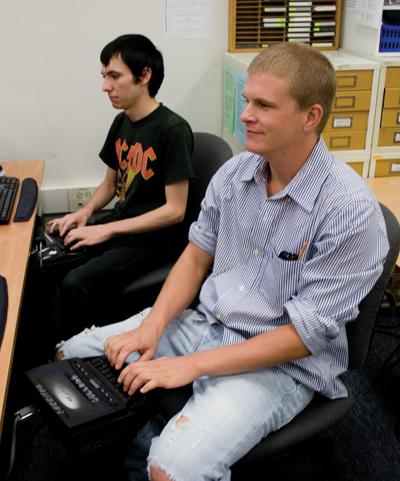 The club was awarded for Broadcast Captioning and Communication Access Real-time Translation.

Micki England, court reporting club adviser, stated that in order to make an appointment Vikki Morgan, professor of court reporting professor, had to join the captioning funding boot camp program all the way in Washington DC.

“We were very thrilled when we were informed that the Cerritos College Court Reporting Program was selected for the award,” England said.

As of Jan. 1, 2006, and thereafter, 100 percent of the programming distributor’s new video programming must be provided with captions.

As of Jan. 1, 2010, and thereafter, 100 percent of the programming distributor’s new non-exempt Spanish language video programming must be provided with captions.

Captioning benefits not only the hearing-impaired but also the ESL students.

With these new requirements also come new possibilities, new classes will be offered by Cerritos College such as:

These new classes will be offered starting Jan. 11.

The program is expected to be a short program, maybe two semesters in order to get the certification to start working as C.A.R.T.

The news was received last May so all of it had to happen as quick as possible with little time to plan it with.

The school has a good amount of teachers that are experience on the field of captioning.

“The outstanding court reporting program at Cerritos College puts us in a good position to become the top captioning training center on the west coast.  With the infusion of the grant money, we can now put our plans into action,” said Mary Balmages, associate professor of Court Reporting.

This is one of the main goals that the club has in mind.

There are a few of captioning centers in the east coast but there are none in the west. The program hopes to keep up with the new different software and system in order to become the first captioning center on the west coast.

The caption multimedia on campus will then start hiring its own students to provide this and other colleges transcription done.

“We were extremely hopeful. We wrote letters to congressmen and women, asking to approve us for the award,” said Celina Murillo, Court Reporting Club president.

Murillo has three years of experience, she would like to invite students on joining this brand new branch, that shows many new opportunities for well developed English and/or Spanish speakers students.