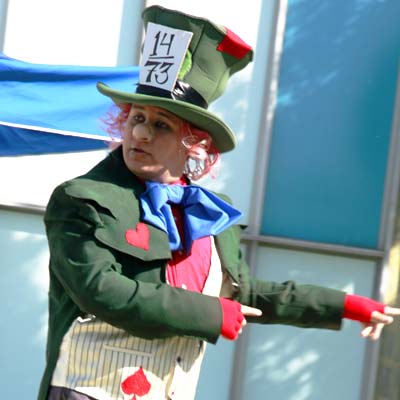 A hell of a good contest was held on last Wednesday on Falcon Square, in the hunt to find the most unique Halloween costumes.

It all started with few contestants showing up at the sign-in table but as the time progressed, the number of contestants signing in increased.

The spectators didn’t had a problem waiting, for they had their hands full with snacks provided from Student Activities.

“We get free food and a hell of a good show, what more can we ask for?” said Joshua Murillo, one of the spectators.

The contests were divided into three different categories, starting with Most Creative Costume, along with Group Costume and finalizing with Scariest Costume.

There was an even match quality of costumes and participants containing:

cartoon characters, military people, a group of “Cholas,” a Christmas tree, a robot, a clown and many more.

But as the contestants started walking into the stage, there was a costume that caught everyone’s attention.

It was the costume of the Predator, as soon as the spoke person pointed at him the crowd started cheering and showing its love toward him.

“I believe that I speak for everyone when I say that this is by far the best costume here, and it has to win the first place for sure,” stated Jaime Martinez, a spectator.

After the contestants showed their stuff it was time for the judges to make their decision and evaluate in order to decide who would win on what category.

Coming as the winner on Most Creative Costume category was David Kerr dressed as a robot.

The winner of Group Costume was the Veterans Club dressed as GI Joe characters.

As many spectators predicted, the winner of Scariest Costume was Ernie Veloz dressed as the Predator.

To conclude the contest, the judges also awarded the costume that they thought it was the most original, the winner of the most original costume was Gabe Carrasco dressed as the Mad Hatter.

“It was a pretty close contest so nobody had the first place assure but luckily we won on our category,” stated some of the Veterans Club members.

“This is probably my fourth time wearing this $1,500 costume, and even though I’ve been everywhere like San Diego Comic-Con, Long Beach and a couple of other places, I have never had so much love shown by the fans,” Veloz said.