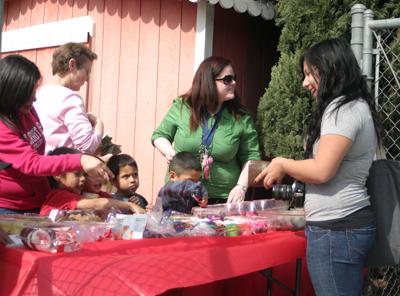 Child development has a bake sale for aid Haiti victims

Bake sale for Haiti, chanted the children to get people to buy baked goods on Feb.11.

“It came from the children’s interest,” teacher Diana Echeverria said.The children heard of the earthquake and wanted to buy food for the victims of Haiti and decided to do a bake sale to raise money.Echeverria continued, “one of the children came in explaining what happened in Haiti and how sad she was about everything that happened and showed sympathy for the victims.”To raise money the child development center sold cookies, brownies, muffins, lemonade and hot chocolate for one dollar.Brisa Hernandez, instructional aide stated, “the children know exactly what’s going on over there and every day they come in to tell us.””We showed them a map of where Haiti is so they know exactly where it is,” Hernandez said.”The children have been educating us, “Echeverria stated, “a lot of the children come in to tell us what they know so they are very aware.”The children also wrote a letter to the Red Cross and mailed it to them.”We are going to ask a representative of the Red Cross to come and speak to the children,” Echeverria said.She continued, “we can talk to them and ask them questions because they want to know what their money is being used for.”The child development center will also be in the process of putting together a race within the next month to raise more money.”The children have been working out and studying how to work out and will also be selling jewely that the children made,” Echeverria stated.