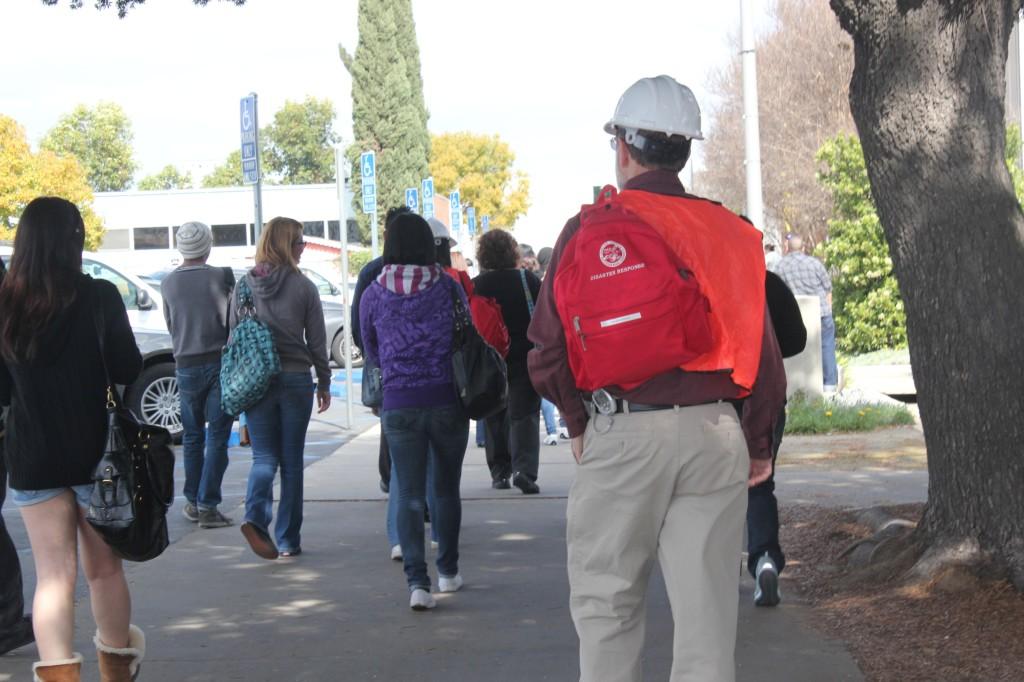 Students returning to class after a campus wide evacuation drill. Designated-area team leaders were assigned to make sure the drill was carried out effectively.

Classes were about to begin, students were studying in the library, and a DJ booth was set up outside by the music department, these and more were interrupted by the evacuation drill that took place last Thursday.

Vice President of Student Services Stephen Johnson explained the importance of having the annual drill.

“Emergencies can happen anytime. Drills serve as a reminder that emergencies arise, that we should and can be better prepared,” he said.

Johnson said all of the colleges employees were notified via e-mail about the drill.

Students and faculty were to meet at eight “useEmergency Evacuation Assembly” signs located across the campus.

Johnson continued saying that those with mobility disabilities were evacuated through lockers containing the Evacu-Chairs.

The school’s special guest disc jockey known as “DJ Kram” was scheduled perform around the same time the evacuation started.

“I’m really not surprised, I knew a head of time it was going to happen,” he said.

A faculty member told DJ Kram before his booth was set up that the evacuation would take place.

Student shared their experience with the evacuation drill.

Psychology major Joey An was standing in line in front of the cafeteria ready to order his food.

An, along with his friend, was told by security to go the parking lot in front of the school until the drill was over.

“For a fire drill, I don’t think it’s that important,” he said. “I think people know what they should do.”

However, many other students thought that it was important to have an evacuation drill.

Kinesiology major Briana Givens was in the computer lab when the started drill.

She stated “I think if there was no one to tell us to evacuate, then we all would have just ended up staying in there and acted like nothing is going on.”

Some students arrived after the drill started, but was still able to be part of the experience.

Ronald Banks, administrative justice major said, “I walked up and seen everyone standing in the grass area.” “It was my first experience at Cerritos to acknowledge an evacuation,” he added.

Banks continued stating, “I was just very concerned because I didn’t know that it was real or a practice evacuation, but I still know what to do from high school experiences.”

Chemistry major Heather Miller did not make it to the evacuation, but heard about it from Cerritos College mobile.

“Also, I knew something was weird because me and my friend were trying to park and everyone was outside,” she said.

Many students were not aware about the evacuation.

Liz Trujillo, undecided major shared her experience on the drill.

“It was pretty hectic I could say, not much organization” Trujillo said.

Not everyone was with the crowed during the drill.

Anthony Velasco, psychology major, was at the grass near Studebaker and Alondra when the evacuation started, waiting for his class to start.

“When I seen the drill, it seemed unorganized,” he said.

Velasco added that if there is going to be an evacuation drill, to “do it right.”

“Because the thing is, no one takes it serious.”

Johnson encourages students to get familiar with emergency posters, learn the college’s procedures, “and understand what to do in the event of a need to evacuate buildings on campus.”