Veterans remembered at The Hill 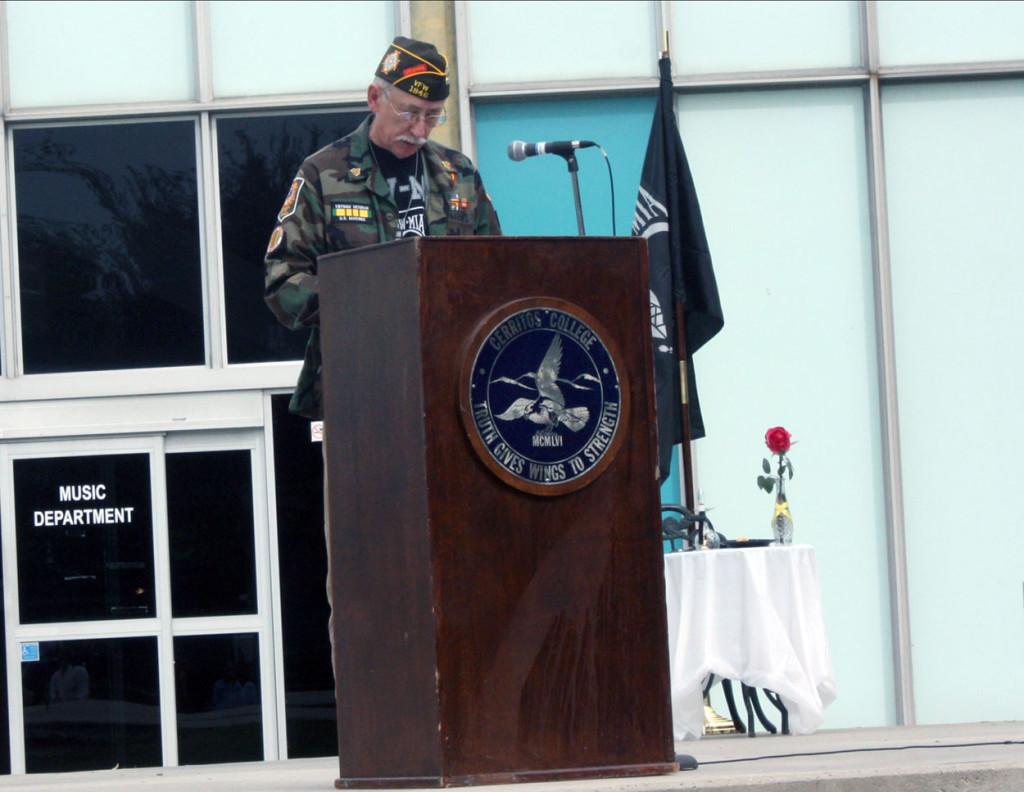 Marine veteran Tom Tislow delivers a presentation about the table and flag dedicated to POW/MIA members of the United States military during the Veterans' Day ceremony on Thursday. Students and administrators attended the ceremony at the Cerritos College amphitheatre which was hosted by the Student Veterans Club.

Vietnam Veteran Tom Tislow believes that Veterans Day is a time to recognize the men and women who serve the country in the military.

Tislow was one of several people who took part in the Veterans Day Celebration on Thursday at the Hill.

“For the young generation coming up, they need to understand that freedom is not given to them freely, we have to fight for it, he said.”

Tislow also said, “I thought [the celebration] was very nice. For me being from another generation, it’s very humbling to be here with these young warriors.

“Believe it or not, I was their age when I was in Vietnam, it’s like going in a full circle,” he said.

President of the Board of Trustees Tom Jackson said, “[The military is] putting its life on the line for us every day over in foreign countries. The least we could do is to recognize its gift to the United States.”

Student Veterans Club President Hsiao Hsu talked about why it is important for Cerritos College to celebrate Veterans Day.

“The last time I checked, there were close to 400 students here that are actually Veterans, so whether it be young or old, there are a lot of Veterans that come to school.

“Cerritos College needs to recognize that we need to support those who come to school here that are Veterans, and basically just tell people, ‘hey, we haven’t forgotten about you.’”

He also talked about the event as a whole.

“Overall, [the celebration] was great, we had a lot of speakers that were really, really inspiring, he said.”

Tislow said that he loved the entire ceremony.