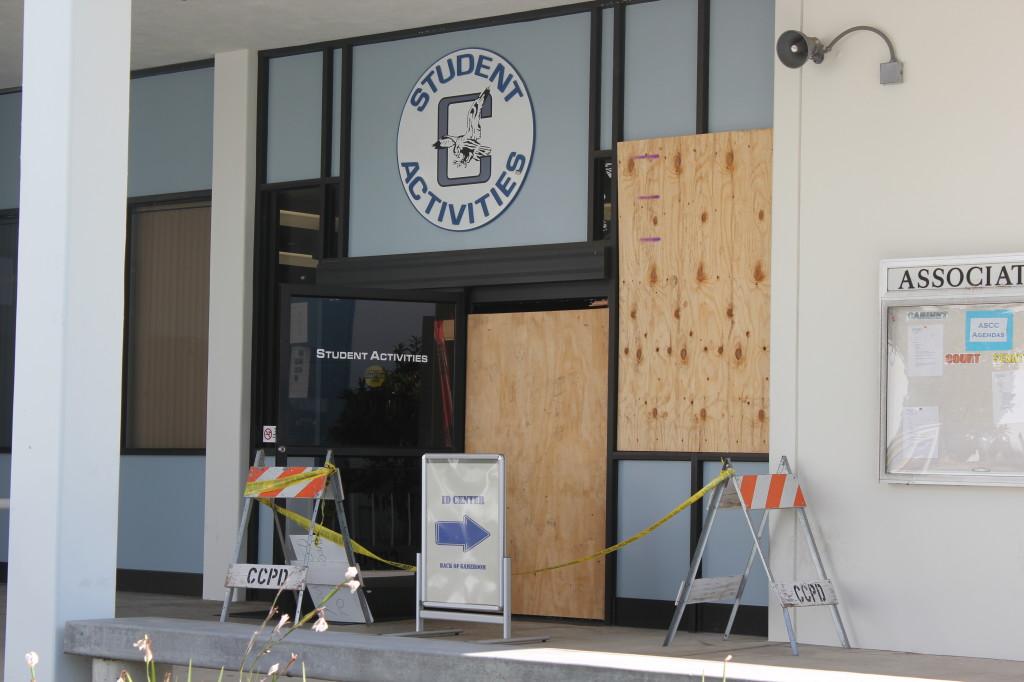 The Student Activities office entrance. Plywood was used to board-up the broken windows and caution signs and tape were placed on and around the affected areas.

Cerritos College begins the recovery process after being burglarized and vandalized by unknown individuals over the weekend.

Two campus locations were vandalized and one location was burglarized.

The Student Activities Center located adjacent to the bookstore was broken into and vandalized.

After the vandal(s) gained entry into the Student Activities Center, the vandal(s) broke into an office belonging to Robert Chester, coordinator of Student Judicial Affairs.

According to Media Relations Coordinator Aya Abelon, nothing was stolen from the Student Activities Center.

The game room was also vandalized. The vandal(s) gained entry by breaking through a glass door located in front of BK 111/112.

Some windows of the game room were also broken.

The Math Success Center was burglarized. The burglar(s) gained entry by breaking through a door located outside the Learning Resource Center Building.

The burglar(s) used a cutting tool to remove an anti-theft cable that secured the computers to the desks.

“Not all the computers were taken, but it is unfair for those students who used to sit there.”

Webb goes on to say, “It’s kind of disappointing. The class is going to be impeded by this.”

Students who sat where the computers were located must now share computers with classmates until school officials obtain replacements.

According to Cerritos College Police Chief Richard Bukowiecki, the vandalism and burglary are two different incidents.

“The vandalism and theft are unrelated,” Bukowiecki said.

Bukowiecki estimates that the vandalism happened on Sunday, Sept. 30 between 11 a.m. and 2 p.m. and that the theft took place sometime this weekend.

He also estimates that $15,000 in school property was stolen and $2,000 in property damage was created.

Since the vandalism and burglary are ongoing investigations, he was unable to release much information.

“It is eerie since we (Cerritos College) have 24 hour campus police.”

She believes that more than one individual carried out the theft since multiple computers were stolen.

The vandalism and burglary was a major topic around campus, especially during the ASCC Cabinet meeting held Monday at 2 p.m. in BK 111/112.

Amna Jara, coordinator of student activities, addressed the vandalism and burglary during the meeting.

“I’m sorry about the unfortunate news of what happened in the office (student activities), but we can’t control what people do.”

ASCC President Lance Makinano was one of the individuals who helped clean up the mess created by the vandal(s) in the Student Activities office.

Makinano suspects that a disgruntled student or former student may be responsible for the vandalism.

“A student that was suspended or expelled may be responsible.”

He goes on to say, “It is kind of depressing. We (Cerritos College students and faculty) have to take precautions to prevent things like this from happening again.”

“They should increase their security and install video cameras.”

Abelon expressed her frustration over the vandalism and burglary incidents.

“It is a horrible act. I just hope that they find and make an arrest as soon as possible.”

She goes on to say, “Campus police are doing its best in the ongoing investigation.”

If you have any information concerning the vandalism and/or burglary, contact the Cerritos College Campus Police Department at (562) 860-2451 Ext. 2325.