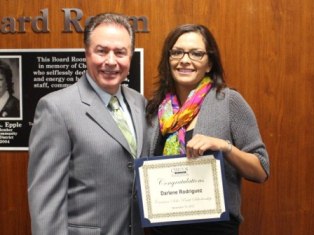 Scholarships are a big deal for college students who are looking for some extra help with paying off their school expenses.

Nursing major Darlene Rodriguez was fortunate to be presented with the Carmen Solis Pratt Scholarship.

The scholarship is given to one student annually who meets the requirements of being 35-years old and are re-entry college students.

Executive Director Steve Richardson commented on why Rodriguez was the ideal choice for the scholarship saying, “She demonstrates outstanding initiative and drive to accomplish her educational goals.”

The scholarship was created by retired Norwalk Superior Court Judge Dan Pratt, who founded the $1,600 scholarship back in 2001 in honor of Pratt’s mother who held education very high in esteem, but was not able to attend a college herself.

Rodriguez was born and raised in Whittier, Calif. When she was in her twenties, she left school to get married just before she was about to transfer to a four-year university.

Rodriguez said, “Life happened, and I had two sons in two years. Later I became divorced so I had to support them (sons) and be there for them, so I had no time for me.”

As a single mom, Rodriguez worked for a telecommunications company for 12 long years. The company decided to cut the workforce in half and relocate. Being faced with unemployment, Rodriguez was forced to think deeper into her future and decided to return to school, pursuing her nursing degree.

“I knew I was ready to commit and not give up this time. I had the determination and the drive,” Rodriguez said.

Rodriguez shared why she wanted to be a nurse, “My first son was born premature and was in the NICU for five months. He was the one who lead me to my major. The nurses were angels that healed my son besides medicine. Those nurses that cared for my son for 5 months were so good at what they did. I thought I would love to go back to school and be like them.”

Her son Andy said, “I’m very proud of my mom. She inspires me.”

Rodriguez’s other son Anthony commented, “I’m proud of my mom because she encourages me to do my best.”

Rodriguez commented on how she reacted toward the news of the scholarship saying, “I was very surprised. I never thought out of all the applicants that they would chose me. This scholarship will definitely make life a lot easier for me and my family.”

She is very thankful to Dan Pratt for founding the scholarship.

“Pratt set up this scholarship for students that he doesn’t even know to help us financially, to me that is such a selfless act and I will definitely pay it forward when I graduate and find a job.”

Rodriguez had some final words for students who want to return to school after being gone for so many years, which were “Don’t ever give up on your dreams. It is never to late to go back school. My motto is anything is possible, as long as you set your mind to it.”